Like us on Facebook, follow us on Twitter! Check out our new tumblr page. :)
Manga News: Toriko has come to an end; but be sure to swing by and share your favourite moments from the series!
Manhwa & Manhua News: Check out the new Manhwa and Manhua shout-out (March 2016).
Event News: One Piece Awardshas concluded. Check the results Here!
MangaHelpers > Manga > Browse > Norio Da Cho~n
Home
Chapters
Translations
RSS 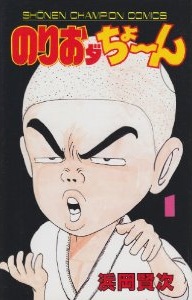 This gag manga features a small, hyperactive, violent, immature middle schooler named Norio. He lives with his father, and he has two childhood friends, Yoshimura and Momomi. His friends constantly get dragged into the crazy stunts he pulls, though they try to keep him from acting up in school. It looks like joining the judo club might provide a more constructive outlet for his energy, though not even his judo matches are free from his shenanigans. Norio's school, and his father, for that matter, just don't know how to handle his wildly energetic, unpredictable, and uninhibited behavior! [tethysdust]