Like us on Facebook, follow us on Twitter! Check out our new tumblr page. :)
Manga News: Toriko has come to an end; but be sure to swing by and share your favourite moments from the series!
Manhwa & Manhua News: Check out the new Manhwa and Manhua shout-out (March 2016).
Event News: One Piece Awardshas concluded. Check the results Here!
MangaHelpers > Manga > Browse > Ooku Chakapon!
Home
Chapters
Translations
RSS 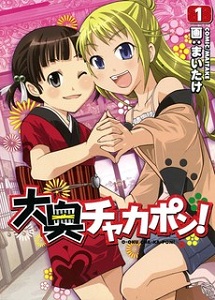 In ancient Japan, the Shogun established the Ooku, a harlem of beautiful females, to give birth to and raise the heir to the throne. But 400 years later in a timeline slightly different from ours where the military empire still exists and Japan is still closed off from the rest of the world, the Ooku is in chaos. What used to be full of gracious and refined ladies, the girls now are violent and rude. They do as they please, get themselves into shenanigans and wreck havoc around the castle! [vyc]