Like us on Facebook, follow us on Twitter! Check out our new tumblr page. :)
Manga News: Toriko has come to an end; but be sure to swing by and share your favourite moments from the series!
Manhwa & Manhua News: Check out the new Manhwa and Manhua shout-out (March 2016).
Event News: One Piece Awardshas concluded. Check the results Here!
MangaHelpers > Manga > Browse > P-Ken
Home
Chapters
Translations
RSS 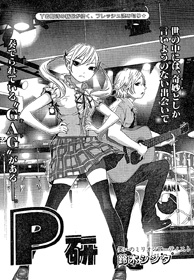 Just after he bought a new guitar, Hatosaburou finds out that his Jazz Club is being shut down! The club is supposedly being merged with the Popular Music Club, but all the other Jazz Club members would rather quit music altogether than deal with the Pop Music Club's president. She's the headmaster's granddaughter, and so her club gets far more than its share of the school budget. Furthermore, she's a violent, bad-tempered girl who refuses to allow any boys to join her club. Will the tenacious Hatosaburou be able to weather all the pointless pain and humiliation and finally join the only club where he can play the guitar? Or will he be forced to lose his masculinity in the process? [vyc]