Like us on Facebook, follow us on Twitter! Check out our new tumblr page. :)
Manga News: Toriko has come to an end; but be sure to swing by and share your favourite moments from the series!
Manhwa & Manhua News: Check out the new Manhwa and Manhua shout-out (March 2016).
Event News: One Piece Awardshas concluded. Check the results Here!
MangaHelpers > Manga > Browse > Robotics;Notes
Home
Chapters
Translations
RSS 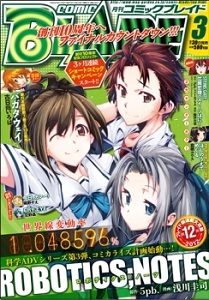 In 2019, childhood friends Yashio Kaito and Senomiya Akiho are in their last year of high school. Together, they are the only students in the robotics club, which has lost its school funding. Akiho is passionate about robots, and longs to complete building the robot her older sister Misaki began in this same club. Kaito doesn't really care about robots, and is obsessed with video games, specifically "Kill Ballad Online." However, he stays in the robotics club due to his friendship with Akiho. Now, just after Kaito is accused of cheating in his favorite game, Akiho decides to risk her club's existence in exchange for the funding to finally finish her sister's giant robot... [tethysdust]