Like us on Facebook, follow us on Twitter! Check out our new tumblr page. :)
Manga News: Toriko has come to an end; but be sure to swing by and share your favourite moments from the series!
Manhwa & Manhua News: Check out the new Manhwa and Manhua shout-out (March 2016).
Event News: One Piece Awardshas concluded. Check the results Here!
MangaHelpers > Manga > Browse > Saikyou Mahou Shoujo Akira
Home
Chapters
Translations
RSS 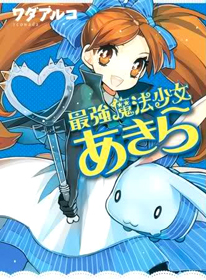 Akira, a teenager, has a quiet crush on his classmate Toriko, but he is so nervous that he has never even spoken to her. One day, he finds a ring lying on the ground, and carelessly puts it on his finger. Suddenly, he is transformed into a powerful magic girl, complete with a supernatural companion to guide him! As a 9-year-old magic girl, he can rescue Toriko from dangerous creatures and even speak to her, but that will not get his true form any closer to romance.

To make things more complicated, he soon meets another little magic girl, named Yuri. She sets her sight on teenage-boy-Akira, but sees little-girl-Akira as a rival to her romantic conquest. Will Akira be able to deal with his alter ego and Yuri, keep his identity a secret, and also somehow win Toriko's heart? [tethysdust]