Like us on Facebook, follow us on Twitter! Check out our new tumblr page. :)
Manga News: Toriko has come to an end; but be sure to swing by and share your favourite moments from the series!
Manhwa & Manhua News: Check out the new Manhwa and Manhua shout-out (March 2016).
Event News: One Piece Awardshas concluded. Check the results Here!
MangaHelpers > Manga > Browse > Senjou no Valkyria 2
Home
Chapters
Translations
RSS 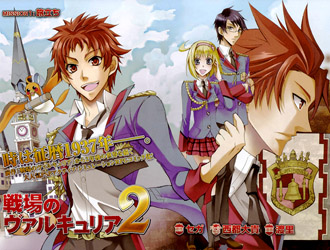 In the country of Garia, teenage boy, Avon Hardens lives in a small town called Melfair, located at the outskirts of the city. His older brother Leon attends the Lanseal Military Academy in the capital. One day, Brickson, a man claiming to be one of the teachers at the school, comes to report to Avon that Leon is dead. Even more, due to top secret reasons, his death will not be reported nor will Avon be able to know the circumstances of Leon’s death. Distraught and angry, Avon decides to enroll into Lanseal to get to the bottom of the cover up and find out what really happened. [vyc]