Like us on Facebook, follow us on Twitter! Check out our new tumblr page. :)
Manga News: Toriko has come to an end; but be sure to swing by and share your favourite moments from the series!
Manhwa & Manhua News: Check out the new Manhwa and Manhua shout-out (March 2016).
Event News: One Piece Awardshas concluded. Check the results Here!
MangaHelpers > Manga > Browse > Star Light Woman
Home
Chapters
Translations
RSS 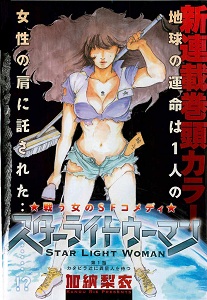 An alien species wanted to start a revolution against their oppressors, and they think they may have found the power in humanity to accomplish their goals. They discovered that humans have latent superpowers, and so they began to abduct them and awaken their abilities. Unfortunately, the humans' abilities were not very useful for their purposes---at least not until they found the destructive power of #214.

#214 is actually a young woman named Hoshi Yumako, who has no interest at all in the aliens' revolution. The abduction and powers have seriously screwed up her life, and all she wants is to be able to live a normal life. Pursued by the aliens, she tries to work part-time and keep her powers from ruining everything. However, she knows she's not the only one out there; she might find allies among the empowered rejects of the aliens' experiments. [tethysdust]