Like us on Facebook, follow us on Twitter! Check out our new tumblr page. :)
Manga News: Toriko has come to an end; but be sure to swing by and share your favourite moments from the series!
Manhwa & Manhua News: Check out the new Manhwa and Manhua shout-out (March 2016).
Event News: One Piece Awardshas concluded. Check the results Here!
MangaHelpers > Manga > Browse > Taiyou no Uta
Home
Chapters
Translations
RSS 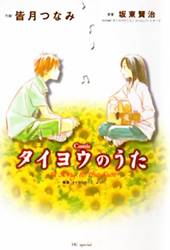 One of two manga adaptations of the television drama by the same title, originally conceived as a remake of the 1993 Hong Kong film, "C'est la vie, mon chéri."

Sixteen-year old Kaoru, who cannot be exposed to sunlight due to her sickness, spends the days sleeping or watching a boy outside her window. During the nights though, she goes out and sings with her guitar in hand. What she dreams of is a love that can't come true since their times never overlaps, or so she thought...