Like us on Facebook, follow us on Twitter! Check out our new tumblr page. :)
Manga News: Toriko has come to an end; but be sure to swing by and share your favourite moments from the series!
Manhwa & Manhua News: Check out the new Manhwa and Manhua shout-out (March 2016).
Event News: One Piece Awardshas concluded. Check the results Here!
MangaHelpers > Manga > Browse > trash.
Home
Chapters
Translations
RSS 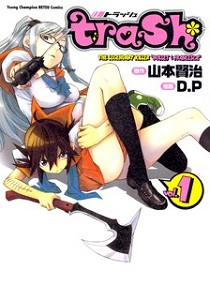 The mafia boss of the Iwashi family is a high school girl named Konomi Minoko. But don’t let her appearance fool you; she has done and seen things normal citizens can’t even imagine. Under her control are two assassins who have gained legendary status for their deadliness and ability to get any job done. Ishikawa Rushia, codenamed Baret, uses a modified handgun that uses a custom made hollow point bullet that explodes the target from the inside. Shirato Marin, codenamed Francesca, uses a original weapon that is a mix between a throwing axe and battle axe. Both of them are Minoko’s high school classmates and seem like normal teenagers but are two of the most feared killers in the mob world who handle missions often involving other assassins and underground groups. [vyc]