Like us on Facebook, follow us on Twitter! Check out our new tumblr page. :)
Manga News: Toriko has come to an end; but be sure to swing by and share your favourite moments from the series!
Manhwa & Manhua News: Check out the new Manhwa and Manhua shout-out (March 2016).
Event News: One Piece Awardshas concluded. Check the results Here!
MangaHelpers > Manga > Browse > Trauma Ryoushi Kesshou
Home
Chapters
Translations
RSS 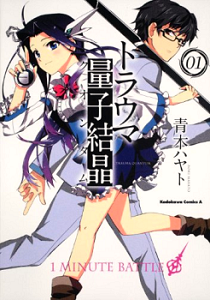 Tokitou Haruto, during his first year in middle school, lost all of his friends because of a Science Fiction novel he had read. He was so engrossed in the novel that he started calling men “Kei” and the ladies “Florlain,” which was spread throughout the school at that time. Unable to cope with the sudden exclusion, Haruto continued to isolate himself throughout his middle school years.

Now, as a first year high schooler, Haruto faces a new “problem.” One casual day at school, the classroom becomes perfectly still. Time has stopped again. Having experienced this time-stop multiple times, Haruto begins to wonder if this time-stop is actually a dream. But all of this doubt stops when he meets Sakazaki Kuon, someone else who knows and experiences the time-stop. She is also part of a team of members who defends the world from monsters who attack the world using this time-stop dimension: Kohakjal. What relation does Haruto have with a group who fends off time-stop monsters? Could it be that he's the only who can truly fight them off? [Midori-Mori]