Like us on Facebook, follow us on Twitter! Check out our new tumblr page. :)
Manga News: Toriko has come to an end; but be sure to swing by and share your favourite moments from the series!
Manhwa & Manhua News: Check out the new Manhwa and Manhua shout-out (March 2016).
Event News: One Piece Awardshas concluded. Check the results Here!
MangaHelpers > Manga > Browse > Wahhaman
Home
Chapters
Translations
RSS 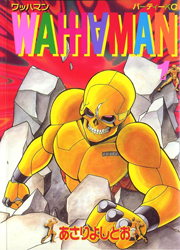 Wahhaman is a special robot soldier built ten thousand years ago by the Atlanteans. Found and dug up in present-day Toukyou, he doesn't remember anything, due to a nasty knock to the head he received at some point. People tend to mistake Wahhaman, who is unable to speak except for laughing when going into battle, for someone or something that they are looking for in their own lives.

Later volumes of Wahhaman are more action and humour based and focus around the battles between Wahhaman and an organisation led by a mysterious man. The disfigured man, who has a long time grudge against Wahhaman, uses a number of transforming robots to capture Wahhaman, but they always fail. [From PRISMS]