Like us on Facebook, follow us on Twitter! Check out our new tumblr page. :)
Manga News: Toriko has come to an end; but be sure to swing by and share your favourite moments from the series!
Manhwa & Manhua News: Check out the new Manhwa and Manhua shout-out (March 2016).
Event News: One Piece Awardshas concluded. Check the results Here!
MangaHelpers > Manga > Browse > Wendy
Home
Chapters
Translations
RSS 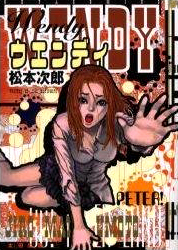 Is this a dream? Reality? Or maybe something else..........?
Every night, a mysterious man who styles himself Peter Pan sneaks up in Manami's room. He takes her with him to Neverland, an eerie place created out of human desire. Neither pain nor obligation exist in this place. A fairytale land of freedom, where people live governed only by their own instincts. There, all of reality's troubles and unpleasantness may be forgotten. However......... being human may not be quite as bad as it sounds.

Note: It was firstly published in Kodansha's Weekly Morning in 1996, but was discontinued. The tankouban was released by Ohta Shuppan in 2000.