Like us on Facebook, follow us on Twitter! Check out our new tumblr page. :)
Manga News: Toriko has come to an end; but be sure to swing by and share your favourite moments from the series!
Manhwa & Manhua News: Check out the new Manhwa and Manhua shout-out (March 2016).
Event News: One Piece Awardshas concluded. Check the results Here!
MangaHelpers > Manga > Browse > Zerozaki Soushiki no Ningen Shiken
Home
Chapters
Translations
RSS 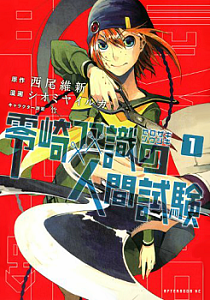 Iori is a high school girl who doesn't know what she wants to do with her future, and tends to run away from things. One day, she is attacked by strange dead-eyed people on her way to school, only to be saved by an equally mysterious long-haired man. Later that day, her friend at school, Jion, seems to fall under the same murderous influence. To her surprise, she finds herself capable of defending herself from his violent attack. Afterward, the long-haired man she met in the morning, Zerozaki Soushiki, arrives once more, this time to invite her to become his little sister. What has Iori become involved with, and will she be able to survive this change to her life? [tethysdust]