darth volcaniz said:
shanks DID use the conqueror's haki on the sea king. but that was only after it had taken his arm. this is probably due to luffy practically being in the sea king's mouth at that point.
Click to expand...

Oh, forgot about that. He could have probably used haki (if that was planned), but I still think it was more of a symbolic thing to represent his faith in Luffy.

yeah, hard to predict how your story will goes more than 3 times longer than you had originally planned 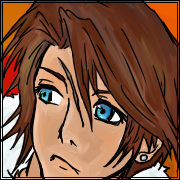 M3J said:
It's symbolic, as we learn later on. I think it's to show that Shanks had faith in Luffy and thought of him as highly important, as well as possible successor to Roger. Shanks always mentions "a kid who reminds me of what Roger used to say" whenever someone asks what happened to his arm or where the strawhat went.

Plus, chances are that Shanks didn't learn haki at the time, no? He wasn't part of the Four Emperors, if I recall/assume and was still green.
Click to expand...

Actually, no, chances are Shanks was just as big of a badass back then. First of all, you dont become a yonko in a day, and then there's all the people we know he fought before meeting Luffy -- he was on par with Mihawk, and his scars are from Blackbeard.

You have to realize that Shanks is forty years old, going ten years back for him isn't a big difference at all.

M3J said:
It's symbolic, as we learn later on. I think it's to show that Shanks had faith in Luffy and thought of him as highly important, as well as possible successor to Roger. Shanks always mentions "a kid who reminds me of what Roger used to say" whenever someone asks what happened to his arm or where the strawhat went.

Plus, chances are that Shanks didn't learn haki at the time, no? He wasn't part of the Four Emperors, if I recall/assume and was still green.
Click to expand...

but remember whitebeard said "when a man of your caliber travels to east blue and comes back missing an arm...."

so if whitebeard was acknowledging shanks' strength, that means he was probably already a proficient haki user

Maybe CoO wasn't in Oda's mind back then, he only planned CoC for powerful people in the same level as the Yonkou and CoA for fighting logica. Still Shanks could had chopped off that small weak monster head without hurting Luffy at all.

Haki is not supposed to make people invencible. Shanks may not have been able to use it on time, or it may not be enough to protect him from a giant beast.

blade5468 said:
Actually, no, chances are Shanks was just as big of a badass back then. First of all, you dont become a yonko in a day, and then there's all the people we know he fought before meeting Luffy -- he was on par with Mihawk, and his scars are from Blackbeard.

You have to realize that Shanks is forty years old, going ten years back for him isn't a big difference at all.
Click to expand...

I never said him not being Yonkou indicated he didn't have strength, just that he may not have been strong enough yet. I was corrected when members pointed out Whitebeard and Mihawk's conversation with Shanks and Shanks using haki on the sea monster.

Given that Shanks did give Luffy his hat that Roger passed onto him, and how he described Luffy to Mihawk and Whitebeard... it's not a stretch to say that it could have been symbolic for Shanks to let his arm be bitten off to save Luffy.

Conquerors haki is shown in the first of the manga, he does it right after he saves luffy and loses his arm and is like "Get lost" which luffy remembers and thinks is awesome when he sees it later.

i think the hakis were planned, as soon as u get to grand line u fight logias and it makes u think "these are so strong, you literally cant hurt them unless u know there weakness" Like crocs was easy, and enerus was convenient/lucky. and when luffys grandpas punch hurts, and skypiea had observation haki.

I think its more symbolic, i thought about it as well that he shoulda been able to just conq haki that thing before it got to luffy, but maybe shanks was learning his power at that time because he was young, coulda been like when luffy stopped the Flying fish riders leaders bull (cant remember name D something) which would explain why he did it after instead of before./2

I always think that Shanks didn't care if he lost an arm or not. He wasn't trying to protect himself, but Luffy.

Personally I want it to be that Shanks was doing it to teach Luffy a lesson, but that it probably too farfetched.

rather than just suggesting an oversight on Oda's part, I like to think there is an in-story signficance for Shanks losing his arm. Like, it was planned and stuff.

I think that it is symbolic AND that at that point it wasn't a fight for Shanks. If it had been a fight then he would've known that he can beat the monster with his sword or CoC but he didn't care about that. He just wanted to get between the monster and Luffy and THEN think about actually beating it.

its just a single logic hole.. it's the matter because haki was odas way out of logia types... he didn't thought about that in the early chapters..

Think about the "ace vs smoker" fight... both should have had Haki then.. but they told themselves and others the battle would be pointless...
Only kings haki was pland..

you fund such wholes the entire story around haki and older fights.. sad but true

Could you point us to a couple of those plot holes please?

Ace and Smoker didn't have haki because they didn't train them before. Smoker was stationed in the "weak" East Blue, Ace was so overwhelmingly good with his fruit and own strength that he did come so far without the need of haki. How do you think his fight with Teach would have ended, had he imbued any of his fire attacks with haki? He would likely have won. Jozu's DF allowed him to ignore CoA, or at least hardening, Marco could regenerate himself with his DF, so he didn't need to bank on CoA either, which is why he was such a lousy opponent for Akainu. Or Sakazuki was just that much more proficient that his powers overwhelmed theirs.

Shanks stayed at the Most pesful sea for years when Luffy was just a kid, why was that !!
he even traveled to many places within East blue !!

was he searching for new pirates ? looking for Ponegleph ? killing any bad pirates at that area ?
something we still don't know ??


Was he trying to reach the last Island "Raftel" then he & his crew got wounded, sad so they spent all that time recovering ??

Or he was searching for "taking care of all for seas" for those years then he returns back to Grand Line ??

Makino is pregnant.
I think we could add that to your list of "Reasons".

Ten years ago when the story begins, it's possible that Shanks isn't already a Yonkou. He is a rising star among pirates for sure, as Whitebeard ackownleged later, but maybe not much more. He has already sailed around Grand Line once onboard Roger's ship, then had his own share of adventure : maybe he and his men want to relax and enjoy the world for a bit. Shanks is portrayed as a carefree man throughout the series, after all, so he would definitely be the kind of person to let things be for a couple of years

Another hypothesis (theory, even, as I don't have any solid facts to back it) is that Shanks has already been to Raftel and knows what lies there; and so, he isn't in a hurry to return to that island, because he knows somehow that the conditions for anyone to reach it aren't yet satisfied.

A more prosaic factor might be that Oda hadn't thoroughly planned all this New World and Yonkous business so early in the series (the first few chapters tell a much more straightforward tale, with almost naive simplicity at times). He didn't give it much thought because it didn't matter back then and maybe we will simply never know.
Last edited: Oct 5, 2013

Well, I believe in Oda !! I'm sure there was a reason lol


from ur 2 replies, I really believe now that he took 1-2 years break for him & his men in order to meet their families (for the last time)

& they went already to "Raftel" with/without Roger & he knows he & no pirate around at that time can go for it ... he is waiting for a person with " .D Family"

I was rereading the thriller bark when I arrived at this Chapter. Before the arc there is a legend that hundreds of ship disappear from florian triangle, once moria is introduced it can be assumed that this was moria's doing however the chapter clarify that the legend is indeed true "10 years ago".


Obviously from the silhouette we can easily assume that this is a sea monster,, But the wording seems to imply that this is ancient and deep mystery which obviously connected to the "black Century". If we assume that this a creature then the silhouette is its body, but why is not moving?. this could mean it is dead or simply in hibernation.. Finally the chapter imply that this creature is moving until 10 years ago, which is the start of the series.


Other than its connection in the black century,, I think this creature or whatever it is is connected to Shanks, Well if it is a creature then he probably killed it or injured to the point of hibernation. this may have been one of the reason he become a yonkou.


On the other note,, This silhouette can be a machine or simply the ancient weapon PLUTON, however base on the series it seems that the pluton is in alabasta,,

Maybe that monster that we "seen" -scary eyes in fog- will be explained as some kind of fog-producing creature that lives in New World as well. Or/and Moria found that monster and did something to tame it.

I that you pointed that out. Timing also fits with Shanks arriving at New World.
Also Moria vs Kaid must have happened around 10 years ago in this case. Time when Doflamingo became a Warlord- gotten title of Dressrosa King. Maybe Oda will show that some big conflict happened those 10 years ago.
Moria must have been such a beast in his prime to fight with Kaido. Hope that he will get reintroduced soon as badass close or better than his old self. Not broken, fat slob that we seen till now.
Last edited: Dec 5, 2013

Don't see a connection between Shanks and that monster. Nothing actually connecting them. It's just there, in Florian Triangle, no hints, no traces, nothing.

I would mysteries to stay mysteries and Shanks having nothing to do with it. Oda has to leave some stuff to imagination or it will become a boring series, explaining everything in great detail.
You must log in or register to reply here.
Share:
Reddit Pinterest Tumblr WhatsApp Email Link
Top