Like us on Facebook, follow us on Twitter! Check out our new tumblr page. :)
Manga News: Toriko has come to an end; but be sure to swing by and share your favourite moments from the series!
Manhwa & Manhua News: Check out the new Manhwa and Manhua shout-out (March 2016).
Event News: One Piece Awardshas concluded. Check the results Here!
MangaHelpers > Manga > Browse > Attack No.1
Home
Chapters
Translations
RSS 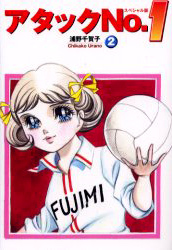 Shōjo sports manga with a famous anime adaptation, actually the first female sports anime series ever. The anime series has been broadcasted in France (as "Les Attaquantes"), Germany (as "Mila Superstar" renaming Kozue to Mila) and Italy (as "Quella Magnifica Dozzina" and in second emission as "Mimì e la nazionale di pallavolo" renaming Kozue to Mimì). The series is responsible for the explosion of the shōjo sports genre from 1960s and on and even inspired some real professional volleyball players.

The story evolves around Kozue Ayuhara, a girl who transferred to Fujimi College and joins the school volleyball team. She has been ill lately but the sport supports her recovering. We follow her on her way to the Japanese top and finally the world top, while she meets her future boyfriend, has to deal with personal tragedies and becomes an emancipated woman.