Like us on Facebook, follow us on Twitter! Check out our new tumblr page. :)
Manga News: Toriko has come to an end; but be sure to swing by and share your favourite moments from the series!
Manhwa & Manhua News: Check out the new Manhwa and Manhua shout-out (March 2016).
Event News: One Piece Awardshas concluded. Check the results Here!
MangaHelpers > Manga > Browse > Birdy The Mighty II
Home
Chapters
Translations
RSS 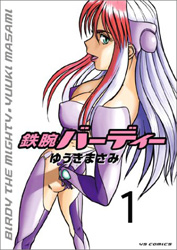 This is the remake version of Birdy the Mighty.

"The original manga ran in what is now Monthly Sunday, but when Masami Yuki began serializing Kyūkyoku Chōjin R in the pages of Shonen Sunday it began appearing infrequently, and was eventually abandoned. Only one volume was ever collected. In 2003 Masami Yuki moved from Shonen Sunday to Weekly Young Sunday, a seinen magazine, and began drawing a remake version, starting the story from the beginning." --Wikipedia

Tsutomu Senkawa, the main character, is killed. The end.

...or it would have been, if the one who killed him wasn't an alien investigator named "Birdy the Mighty." To take responsibility, she decides to keep Tsutomu alive by combining with him. How will Tsutomu's life change, now that his body is also that of a superhuman extraterrestrial agent's? [Reminiscence]

It's funny, and refreshing, I really liked the whole plot of police mix inn with scifi, and aliens. Permalink " "