Like us on Facebook, follow us on Twitter! Check out our new tumblr page. :)
Manga News: Toriko has come to an end; but be sure to swing by and share your favourite moments from the series!
Manhwa & Manhua News: Check out the new Manhwa and Manhua shout-out (March 2016).
Event News: One Piece Awardshas concluded. Check the results Here!
MangaHelpers > Manga > Browse > Tsubasa: RESERVoir CHRoNiCLE
Home
Chapters
Translations
Forums
RSS 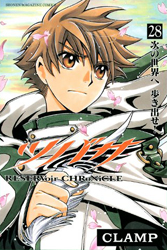 Sakura and Syaoran return, but they're not the people you know. Sakura is the princess of Clow—and possessor of a mysterious, misunderstood power that promises to change the world. Syaoran is her childhood friend and leader of the archaeological dig that took his father's life. They reside in an alternate reality . . . where whatever you least expect can happen—and does. When Sakura ventures to the dig site to declare her love for Syaoran, a puzzling symbol is uncovered—which triggers a remarkable quest. Now Syaoran embarks upon a desperate journey through other worlds—all in the name of saving Sakura.

In CLAMP's usual style, TRC is a mash-up of their previous titles with tons of surprise cameos, though the characters often have little to do with their series' counterparts. The whole interdementional-travel to save a princess gives it huge potential to branch off into something great, although it often falls short IMO. Don't go looking for fantastic battles and such here, though there are few, as CLAMP tends to focus on character development. Be prepared to face lots of vague wording and intrigue as you attempt to decipher what the heck is going on. The artwork is definitely some of the best they've put out--If you're a fan of their style, that is. It certainly is a bit strange how long everyone's arms and legs are.

If you've been turned off of the series because of the early 100 chapters having poor translations, that's understandable--this comic isn't easy to understand (the main villan practically speaks in prose). But if you're willing to stick with it, you may find your own part to enjoy. Permalink " "
Review by cnet128

Tsubasa Reservoir Chronicle is... a CLAMP manga. If you're a fan of CLAMP manga, then that's probably all you need to know; you're bound to enjoy it. Likewise, if you dislike CLAMP's previous works, then you're unlikely to enjoy Tsubasa. If you're not that familiar with CLAMP, or otherwise don't fall into either camp, then things might not be so simple.

First of all, let's make one thing clear – Tsubasa is a crossover work. Indeed, CLAMP have gone on the record as saying that Tsubasa and xxxHOLiC are intended to "tie together" all their other works. The good news, however, is that this doesn't mean you have to have actually read any of those other works to enjoy Tsubasa; it stands on its own remarkably well. Even xxxHOLiC and Card Captor Sakura, the two series with which it is most intimately linked, aren't required reading.

Another thing that probably warrants saying in advance – CLAMP have written a variety of manga, including both the more light-hearted adventure and the more serious, complex, heavy-handed fantasy. Tsubasa... is both. It starts out as the former, and continues in that vein for quite some time, but there are elements of the latter under the surface, and after a dramatic turning point midway through the series, that's the direction it ultimately takes. The story is, by its very nature, rather episodic (a central plot device is that the characters leap between different worlds, and each world tends to form an individual arc of its own) but becomes less so as the focus shifts in the latter half.

The vast majority of characters are recycled versions of characters from previous CLAMP works – not the same characters, but rather alternate-universe counterparts. The two main characters – Sakura and Syaoran – are alternates of the protagonists from Card Captor Sakura, and the "mascot" character, Mokona, is originally from Rayearth. The other two central characters, Kurogane and Fai, are two of the series' few truly original characters. All characters, original or otherwise, are highly likeable and well-designed, and the artwork, as always with CLAMP, is pristine and often elaborate, as well as highly distinctive. And the scenarios are always enjoyable and compelling, especially, in my opinion, in the latter half of the series.

A word of warning, though, to anybody thinking of trying out this series from scratch – the manga is, in my personal opinion, a little difficult to get into, and this isn't helped along by the less-than-brilliant quality of the translations that exist for the earlier parts of the series. My advice would be to watch the first series of the anime (possibly skipping the last episode, since it's not only filler, but very questionable filler), thus bypassing these issues, and only then to move on to the manga (reading from the beginning, or from chapter 50, where the first season of the anime cuts off). I wouldn't particularly advise watching the second series of the anime, since it's very prone to inserting filler, messing with the order of events, and generally being unfaithful to the original material. The OVA is definitely worth watching, though – it would perhaps be a good idea to watch it after reading Chapters 107-135 (the Acid Tokyo arc that the OVA covers), to reinforce the important events that happened therein, as well as to enjoy the excellent adaptation. Permalink " "
Review by SnowflakeDancer

Despite the fact that I don't usually like CLAMP's works, this manga is my favorite ever. Permalink " "
Review by Janina07

Once again CLAMP continues to deliver in their latest series. It is astounding the cast of characters and how this manga-ka's are able to weave every other manga they ever wrote into this one piece of art.

Drama, angst and action are guranteed as well as a feeling of dread and mind numbing plot twist that will make you question your sanity. Permalink " "
Review by Tsubasa Arisato

Tsubasa RESERVoir CHRoNiCLE, also known as TRC, is a 233-Chapter manga and is created by CLAMP. Because of the anime, the manga isn't much popular to the watchers. But then, I was very happy that I watched the anime, that I can NEVER seen the ending if not read the manga.

It is a story where 4 (or 5) People embarks on a journey to go to different Dimensions, also known as "worlds" . As they progress, we all meet some familiar faces, or lets make it straight, LOTS OF CROSSOVERS. We meet Most of The Previous Characters of CLAMP's Works. But then, they have an Alternate Universe.

At the first-half of the story, It will be adventurous, exciting, humorous, and fun.
But when it comes to the second-half of the story, it became, dark and deep, full of angst, Drama, and a whole lot of hates. Also include a lot of Character Development...and I mean A LOT. But no worries. At the later chapters, The Story Development will changed again to adventurous ones, but not like the previous. It has a lot of Fighting Scenes and Battles, Awesome Surprises, and many twists. If you are a shounen fan, I would recommend reading this.

The series also crossesover to another one of CLAMP's works titled, "xxxHOLiC", and somehow also crosses over with "Cardcaptor Sakura". It isn't necessary to read xxxHOLiC in order to understand more about Tsubasa, but I DO recommend you should.

The art was simple, but yet awesome, Especially the fighting scenes.

Well, If you're a first-timer to read a CLAMP manga such as this, I think you won't truly understand at first, but then you will soon. Permalink " "