Like us on Facebook, follow us on Twitter! Check out our new tumblr page. :)
Manga News: Toriko has come to an end; but be sure to swing by and share your favourite moments from the series!
Manhwa & Manhua News: Check out the new Manhwa and Manhua shout-out (March 2016).
Event News: One Piece Awardshas concluded. Check the results Here!
MangaHelpers > Manga > Browse > D.Gray-Man
Home
Chapters
Translations
Forums
RSS 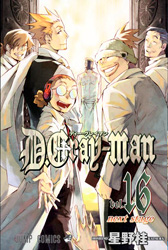 Set in a fictional 19th century England, D.Gray-man is the story of Allen Walker, a 15-year-old boy who roams the earth in search of Innocence. Washed away to unknown parts of the world after the Great Flood, Innocence is the mysterious substance used to create weapons that obliterate demons known as akuma.

Hoshino Katsura has created an interesting beast in D.Gray-man. It has a definite whiff of the standard shonen about it, but there's so much unique about the manga that it's easy to forgive that.

For one thing, the stylistic theme of the whole affair can only be described as "surreal". An interesting mixture of clown motifs and religious themes sets this manga immediately apart. The primary villain manages to be simultaneously comically ridiculous, incredibly sinister, and utterly evil, whilst the main supporting villains manage to be extremely likeable characters with a very human side, even whilst doing their master's undeniably evil bidding. The more generic enemies – the Akuma – are consistently creepy enough to maintain interest. I mean seriously. Creepy.

Characters and their abilities are also very well-executed. Unusually for a shonen manga, the main character is actually both interesting and likeable enough to deserve all the focus he gets; indeed, I think one area this manga succeeds brilliantly in is balancing its cast of characters. One never feels like the cast is getting stale, but at the same time it never seems to grow too large; characters get pretty much exactly the volume of screentime they deserve, and the characters who receive the most focus are generally also the most likeable. I say this in direct contrast to manga such as Bleach and Naruto, which have a huge cast of secondary characters, many of them more likeable than the main characters, but they have a distinct tendency to fail to receive any development, or often even any screentime whatsoever.

The story itself is somewhat episodic. It manages not to shy away from focus on the main villains from very early on, whilst at the same time maintaining a healthy air of mystery and distance about them. Overall, it avoids the classic shonen trap of feeling like just a sequence of battles; with one major exception, progression is generally more complicated than simply battling enemies. The shonen "power curve" of progressively stronger enemies as the protagonists' power increases is present, but never feels forced; "evolution" is treated as an important theme, and often used to draw uncomfortable parallels between the heroes and the villains. The author is also not afraid to give a fair amount of focus to the characters without special abilities. Comedy is present, but generally restricted to short, more light-hearted "relief" segments in between the main story arcs.

But where the series really shines is in its emotion and conflicts. Enemies are routinely treated as sympathetic in one way or another, and the protagonists' "heroic" organisation is itself by no means morally perfect. The war with the Akuma is presented as just that – a war, and generally a losing one, with all the tragedies and internal/moral conflicts that come with that. Whilst the series doesn't have a habit of killing off its central protagonists, tragedy and death are central, recurring themes from the very first chapter.

Overall, I find D.Gray-man a compelling and entertaining series that is well worth a read. Permalink " "
Review by Tanequil

There is something strangely compelling about D.Gray-man. Perhaps it is the cast of characters that grows, not one obviously faster than the others, but together, or perhaps it is the emotional rollercoaster the mangaka has managed to take the readers on.

But whatever the case, D.Gray-man has this mysterious air about it, this feel of something apocalyptic and yet real, as though the characters are losing while it is clear that they are winning. [But are they winning? Winning? Or losing?]

The main character is one that is perhaps not easily identified with, but easily understood. His emotions, his feelings, his goals and his dreams, all these are splayed out in front of the reader. Perhaps not clearly, perhaps not in-your-face, but these themes come subtly across, and whilst these themes might be, like most shonen mangas, slightly clichéd and all too hopeful, D.Gray-man manages to bring them across such that they are believable.

D.Gray-man lets you empathize with the characters, there are never too many of them, and there are never any that you can really hate. Most of the villains [with the exception of the main one who epitomizes pure evil] have this inherent innocence, pardon the pun, to them, and at the same time there is something not quite pure in each and every one of the heroes.

D.Gray-man takes the common perception of good and evil, and while it does not quite turn this perception on its head, it makes the reader start to question, start to think, and start to worry.

Oh yes, the main villain is delectably evil and will stay so, but at the same time, there is this almost childish air to him that can easily be identified with. And yes, most definitely, the main character is fighting to defeat this main villain, but in between them lies this grey area, this killing field where hatred for the other side abounds. And yet, within this hatred lies a certain level of understanding. The characters, they understand each other, they fight each other, and they grow in many many more ways than just power.

One could perhaps say that in D.Gray-man, the lines of good and evil, of friend and foe, are sometimes a little blurred.

There is always something rather, perhaps not disturbing, but profound within the themes and characters of D.Gray-man.

D.Gray-man makes you think, and that is much much more than I can say for most other manga.

You won’t regret it. Permalink " "
Review by sciarbel

the only annoying thing is the senseless beating the characters usually take when doing missions. Just read it, perhaps you will be annoyed as well: they are not just senseless, they are super long, and a drag to the series. Allen Walker's bones are already dust LOL Permalink " "
Review by keizu

please continue uploading like this raws from volume18!! thanx Permalink " "
Review by hanauta

I needed some time before I really got into the series because I'm not into horror/demon stories. But I'm glad that I started reading this manga.
The remarkable aspects of D.Gray-man are:

-profound, interesting minor and major characters who all get enough screentime and development
-original and complex themes and plot
-nice art/drawing style (character designs are really nice, many details, background is fine, but sometimes the drawings are very messy or too often kind of simplified for comical effect (IMO))
-this unfathomable mysterious atmosphere surrounding the story but also emanating a great deal from some of the main characters (Allen Walker, Lavi, Kanda, Cross Marian, the Earl)

Well, I'm most impressed by the characters. They are not comparable to any other manga's cast that I know. Somehow they are particularly adorable, particularly gentle, sad, mysterious and fated/doomed.

Compelling describes this manga perfectly. So stop wondering, just give it a go and fall in love with D.Gray-Man. Permalink " "
Review by JoannaDesu

D.Gray-Man isn't as popular for its storyline as it is for its characters. Hoshinos artwork and character design is beautiful and the developing of the characters personalities are probably her best feature.

As the plot progresses, it becomes more interesting, as does Bleach, Naruto ect.
I really do love this manga, and as the story develops more mysteries and twists, i actually can't wait for each month's chapter to be released >_< Permalink " "
Review by Airianna

this manga was pretty surprisingly good. I like how the mangaka creates the world of D.Grayman that is so remarkable, that I wouldnt be surprised if I look up and found my world in choas. The character Allan Walker is unforgettable as he continues to battle the Akuma (seriously creepy stuff =3) and the 14th Noah.

But one thing that I dont really like is how LONG and DETAILED the battles/memories are. But thats what makes it so good!! Permalink " "
Review by WhiteDragon999

Captivating plot that keeps one guessing from the start, unique and developed characters, and progressive art. Permalink " "
Review by AliceWalker

A very interesting manga by Hoshino Katsura. As for me its my #1. Its a manga that takes place in the late 19th century involving a young man's journey to save himself and the world. During his journey he fights akuma and noahs. At the end of the chapter the manga will leave you wanting more.

The ability of the characters in the story are surreal but amazing.

Overall i suggest you read it, you won't regret it it is a fascinating story to read. Enjoy! :D Permalink " "