Like us on Facebook, follow us on Twitter! Check out our new tumblr page. :)
Manga News: Toriko has come to an end; but be sure to swing by and share your favourite moments from the series!
Manhwa & Manhua News: Check out the new Manhwa and Manhua shout-out (March 2016).
Event News: One Piece Awardshas concluded. Check the results Here!
MangaHelpers > Manga > Browse > Fullmetal Alchemist
Home
Chapters
Translations
Forums
RSS 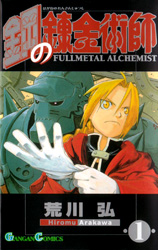 In an alchemical ritual gone wrong, Edward Elric lost his arm and his leg, and his brother Alphonse became nothing but a soul in a suit of armor. Equipped with mechanical "auto-mail" limbs, Edward becomes a state alchemist, seeking the one thing that can restore his brother and himself... the legendary Philosopher's Stone.

At first i read this manga somewhere long time ago and i got some interest with it..the way of using alchemist is different and the fight is good.This is the only Arakawa Hiromu manga i like so far. Permalink " "
Review by Dra

What's truly impressive about this manga is that the plot is very tight. There are no filler chapters, no repetitive and boring filler "omg power-up battle!" arcs like in other long shounen manga (e.g. Naruto/Bleach), just actual tactical plot with multiple groups of characters. The mangaka knows what she's doing, and you can tell that she has a real plan and vision for the ending because of the consistent direction in each chapter. Permalink " "
Review by Autumncherry

I can't believe how few reviews FMA has...Am I over-estimating its populrity? Nah, no way.

Well FMA is nearing its end now (though I have been saying that for over a year) and soon it will be time to say a tearful goodbye! (over dramatic much?) Anyway FMA is a fun series full of supense and dramtic twists as well as excellent plot.

The characters are all very loveable and somehow believeable. The way Ed uses alchemy is fun as well. The series incorperates a lot of real social issues as well such as racism, war crimes, war, the problems of a military state ect. Which just adds to FMA's wonder.

ANyway its a great series which is pretty much awesome in everyway (because I'm not baised at all) and also for you echii loving guys out there, just one pointer, there's a woman called Lust. And for us girls there is a little (just a little) romance within the story between several different characters who all have very OBVIOUS pairings which should not be meddled with. Other than that enjoy the series! (its awesome)

Fullmetal Alchemist is the bossiest thing you will ever read. Its a great blend of action, adventure and fantasy. The characters are deep and well crafted by Arakawa. It is in my opinion, the best that there is. Permalink " "
Review by hagaren_fa

After reading 3 volumes of FMA, I totally fell in love with it. Well, it's near its end now. Will Arakawa publish FMA's sequels for us? Or Side-story? (I want to know about Roy, Hawkeye and Olivier Armstrong past) Permalink " "
Review by s4gk

One of best manga i have read untill now. Permalink " "
Review by ashleyfirework

there a new movie of fullmetal alchemist next year in the summer!!! Permalink " "
Review by RaveDragon

The story is very deep and mature, it is a gem in the shonen genre where it takes some level of open mindedness to truly appreciate this manga, there are many adult teams like war, humanity and religion and you can learn a lot from the characters experience.

The characters are developed nicely and every one of them is used brilliantly, would have liked to see more development on the secondary characters but i am satisfied.

The art is magnificent and enjoyable, it gets better as it goes but is overall micely drawn.

And personally i must say it rocks =D
Permalink " "