Like us on Facebook, follow us on Twitter! Check out our new tumblr page. :)
Manga News: Toriko has come to an end; but be sure to swing by and share your favourite moments from the series!
Manhwa & Manhua News: Check out the new Manhwa and Manhua shout-out (March 2016).
Event News: One Piece Awardshas concluded. Check the results Here!
MangaHelpers > Manga > Browse > Eyeshield 21
Home
Chapters
Translations
Forums
RSS 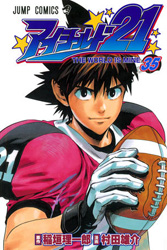 Wimpy Sena Kobayakawa has been running away from bullies all his life. But when the football gear comes on, things change--Sena's speed and uncanny ability to elude big bullies just might give him what it takes to become a great high school football hero! Enjoy all the bone-crushing action and slapstick comedy that this heartwarming coming-of-age story has to offer.

This is the manga that got me to love (American) football. While it might be a bit unreal it still keeps to the feel of competition and the need to work with your teammates rather than against them. It's a very unique twist on a very old and well loved sport.

One of the things I love is the characters. Their designs are very unique, fleshed out, and very real. Each one has their strong points and weak points and you can relate to them all. The team would be less than perfect if even one person were missing, even Ishimaru.

I think the thing that really makes this story works is that there is a separate person for each part meaning there's one person working on art and another on the story. Now don't get me wrong, there are many wonderful authors who do art well but the reason I enjoy how it's employed in ES21 is that it keeps the art crisp from week to week and the story very strong. I can't find fault with either, honestly.

tl;dr Even if you don't like (AM) football you can still enjoy this story for it's art, story, and character aspects. This is one manga I recommend everyone read, if only the first few chapters to say you tried. YA-HA! Permalink " "
Review by keizu

thanx 4 the upload! i love this manga! could u please continue uploading from volume17? please Permalink " "
Review by Doom_magic

I've always been a fan of sports manga series, but Eyeshield 21 remains one of my top favorites out of all of them. And yet, I don't even *like* American football! But that's the great thing about this series. The characters are all wonderful and have excellent personalities, and the main team of characters start off as a bunch of haphazard underdogs trying to achieve what seems like an impossible dream for them in the beginning, so you can't help but want to cheer for them! Unlike so many other shounen protagonists, Sena and the rest of the Devilbats aren't perfect and they do have their losses in the series, but that's what great about them and part of what makes the plot so much fun! Not to mention I can't count all the times that random things in the story have had me bursting out laughing! It has it's serious moments, but at the same time, it definitely knows how to laugh at itself.

However, I admit I was disappointed with how much they tried to rush the plotline during the last arc, all in an effort to get to the final match. Characters that were introduced and looked like they would hold an interesting part in things were given minimal personality and/or chances to appear in the story. There's so much more that they could have done with it and I still feel the series was lacking because of that.

Though even with that flaw, it still makes me really sad that the series has ended now and I keep hoping a sequel series will start up since we are given a brief glimpse into the future at the end. But even if there isn't, I still love the series all the same and recommend it to anyone. You don't have to be a fan of American football to like it, since like I said, I don't normally like the sport. You don't even have to normally like sports manga. It's just a fun to read! Permalink " "
Review by Abnormalabnormalty

Eyeshield 21. It was just about the first proper sports manga series I read; as a general rule, after hearing about Prince of Tennis, and being a sports fan, I found it better to watch sports than to read about them. It was through a friend's reccomendation I finally started reading the series. And I'm so glad I did.

Effectively, the story is about a bunch of misfits fight their way through the National Championships of American Football, building a team from scratch. Though very unrealistic in many aspects, the basic rules and concepts are still there, and employed in a very creative manner. What's better is the uniqueness of every single team, and their different styles. The artwork for the series is also fantastic, and the characters are very distinct and well done, and bring out the style their team plays.

The story itself is great (except the America arc, that was pretty crappy). You might have to endure the first few chapters, being mostly team building stories, but when the series hits full stride, it can't be stopped. Just when you think one match was awesome, the next is even better. When we thought the last play was already fantastic, the next match is even more mind blowing. The team has to rely on luck and build on their past failures in order to keep going as they fight for national glory.

However, as many people will agree with me, the best part of the story is Hiruma. This is one of those series where a secondary character (Not the main protagonist) ends up being the most popular character, and with good reason. Being the main catalyst and driving force of the team, Hiruma's brilliant plays and general steadiness of being quarterback pulls the team through, and his use of firearms is amusing and at times gut busting, whilst his heroic moves, especially against the Dinos, are amongst the best moments in the series. That being said, he is also one of the most complicated characters, and his relationship with Mamori is another great part of the story. The manga is honestly nothing without him.

As the description says, great humour and bone-crunching action awaits you. Brilliant trick plays, defeat and victory are all part of this series that can even rival Slam Dunk in terms of being a sports manga. So, get reading! Permalink " "