Like us on Facebook, follow us on Twitter! Check out our new tumblr page. :)
Manga News: Toriko has come to an end; but be sure to swing by and share your favourite moments from the series!
Manhwa & Manhua News: Check out the new Manhwa and Manhua shout-out (March 2016).
Event News: One Piece Awardshas concluded. Check the results Here!
MangaHelpers > Manga > Browse > Baron von Headmaster High
Home
Chapters
Translations
RSS 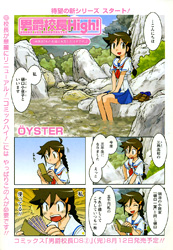 The story revolves around the hilarious antics of Arika and Sayako, 2nd year students of Misakai High School, as well as their classmates from Class B, teachers and their very weird headmaster.

One day a monkey appeared and snatched Sayako’s bag. The headmaster who tried to retrieve the bag for his student failed, and from that day forward donned a wig (the white hair with curls; similar to those worn by lawyers in high court) and claimed himself “Baron Headmaster.”

This is a 4-koma (4-cell) gag manga that takes on the Japanese Manzai-combination (2 comedian-act; think “dumb and dumber”) style of telling jokes. Despite the title, the focus is mainly on Arika and her friends. [6gatsu]