Like us on Facebook, follow us on Twitter! Check out our new tumblr page. :)
Manga News: Toriko has come to an end; but be sure to swing by and share your favourite moments from the series!
Manhwa & Manhua News: Check out the new Manhwa and Manhua shout-out (March 2016).
Event News: One Piece Awardshas concluded. Check the results Here!
MangaHelpers > Manga > Browse > BLANGEL
Home
Chapters
Translations
RSS 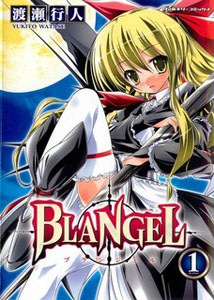 The last memory Alicia has from when she was still human was her mother dying to save her. Three years later in the year 2026, she roams the city of Tokyo as a new breed of species: half vampire, half human. She was one of the first humans to be experimented on with genetic alterations, leaving her with immortality and a hybrid blood able to rapidly heal injuries. Alicia hunts down supernatural beings with her partner Riola, hoping to find a clue to track down those who changed her and dare to use other humans as test subjects. [vyc]