Like us on Facebook, follow us on Twitter! Check out our new tumblr page. :)
Manga News: Toriko has come to an end; but be sure to swing by and share your favourite moments from the series!
Manhwa & Manhua News: Check out the new Manhwa and Manhua shout-out (March 2016).
Event News: One Piece Awardshas concluded. Check the results Here!
MangaHelpers > Manga > Browse > Kurogane (Ikezawa)
Home
Chapters
Translations
Thread
RSS 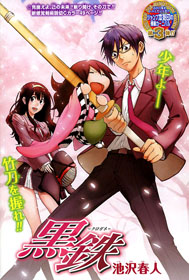 Kurogane Hiroto is in high school, where he is academically the top of his class but literally the worst in physical activity. Born with a weak body, he has no endurance, speed nor strength and Hiroto wants nothing more than to be a hero. Fate teases him by giving him phenomenal eye sight, which allows him to see well beyond anyone else in sports, but his body is not able to react to any of it.

He learns from his friend Shiratori, who wants to recruit him for the Kendo team, about a rumor about a ghost named Tojo Sayuri, who wields a katana and haunts an ally in the city. Half curious, Hiroto goes there only to find that the ghost is real and that Tojo Sayuri has been looking for a successor to her Sakura sword style for 150 years. Sayuri chooses him as the successor after being able to dodge her attack and forces him to learn the Sakura style. Even with the help of the ancient swordsman ghost, Hiroto has to overcome his poor motor skills in order to be the hero he always wanted to be. [vyc]

I miss the Ecchi Scenes. Permalink " "