Like us on Facebook, follow us on Twitter! Check out our new tumblr page. :)
Manga News: Toriko has come to an end; but be sure to swing by and share your favourite moments from the series!
Manhwa & Manhua News: Check out the new Manhwa and Manhua shout-out (March 2016).
Event News: One Piece Awardshas concluded. Check the results Here!
MangaHelpers > Manga > Browse > Kekkaishi
Home
Chapters
Translations
Forums
RSS 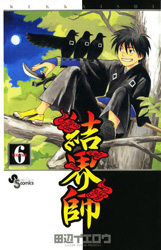 By night, junior high student Yoshimori Sumimura is a "kekkaishi"--a demon-hunter who specializes in creating magical barriers around his prey. By day, Yoshimori's got some other demons to battle: an addiction to sweets and a seriously crotchety grandfather! Yoshimori's pretty 16-year-old neighbor and childhood friend, Tokine Yukimura, is also a kekkaishi, but their families are feuding over who is the true practitioner of the art.

GREAT comic. I had no idea it was running for so long until after I got hooked by the anime. Although the premise is extremely simple (two families with the same strange power to use barriers and use it to protect a cursed land from youkai), it is one of the deepest storylines I've read. This part can be a double-edged sword--for some, it will be intriguing, but for others, it may be too slow. Some may also dislike the artwork...character features are a tad simple, and can look a bit alike. Some of the otherwordly creatures look like stuffed animals. Yes, even one of the most powerful beings in the comic looks like a beanbag. But believe me, it's worth the minor annoyances.

Overall, great action, great characters, and great storyline. If nothing else, it's worth a try. Permalink " "
Review by kaya

Kekkaishi is good, but it is not the best I have read. There are still quite a work for Kekkaishi to be considered as a "masterpiece", and it's definitely not everyone's cup of tea.
Still, Kekkaishi has always been in a special in my heart as it reminds true to what a good story is about, and yet it doesn't go to the route of shounen banality like most its similar demographics brothers tend to fall into after a certain period of time. Maybe that's why it is underated because it doesn't follow the formula how popular mangaka do their work, making Kekkaishi a bit of a oddball.

First of all, the readers have to face the fact it is slow, especially at the beginning. Most of the plot is so heavily focused on character development that the readers can't help but to yearn for some kicks n' kills. Not to mention, Tanabe sensei's art style wouldn't appeal to the mass, as it might seems a tad too generic and odd at times.(I know. There are several times I couldn't recognize certain androgynous brats' gender, and I believe it to be a running gag for the series, unintentionally.) The greater number of characters are rather ultimately forgettable and most probably during the time of reading this work, the readers won't experience the adrenaline rush unlike other works like One piece, Naruto, Bleach; to name a few---- this feeling of "I can't keep my mind off to stop thinking about Kekkaishi (*#%)((*#?!" never pop up for me.

But don't let these minor flaws from stopping you. And yes, I dare to say they are minor, because they mostly happen at the beginning. Once you get over till the first 3 volumes, you will find yourself a rare gem.

The mankaga has a genuine devotion to write---in the eyes of Yoshimori. Yoshimori represents what Kekkaishi is all about. He might be just like any typical hero you can see in any shounen, but he's just too lovable that you can't help to root for him. He is easy to read like a book, and that is a strength, because his innocence and kindness make the work easier to follow and fall in love with.
Let along the fact his motivation to do the Mission Impossible(Seal Karasumori forever, and stop the fend between the two families) is all boil down to one thing---Yukimura Tokine.
How can you not like a boy who loves a girl that much?(And he likes to bake!)

Feminists and people who are frustrated with useless females in most stories will also nod together with Kekkaishi as Tokine really helps a lot by breaking the mold of all-heroes'-love-interest-has-to-be-a-mary-sue and Why-most-females-in-literacy-works-are-so-bloody-useless?!. The basics of the plot establish the equality and importance of her together with Yoshimori in the story. Moreover, her personality easily allow her to hold herself that no character will overpower her presence, making her a strong heroine.

The simplify in how the characters are written actually managed to deepen and enhance the storyline, and yet, it is still easy to understand due to Tanabe sensei's excellent storytelling. Reading Kekkaishi will always remind me why I enjoyed old-school works so much, because they are just that simple and honest. Too many works in the market today are all wanting to be "cool" and yet becoming shallow. They all wanting to be "deep" and yet becoming pretentious. Writers have forgotten the essence of storytelling, and that is you do not feed everything to the fans want(because most fans are biased.), and yet first and foremost, you must love the work yourself for others to love your work. Tanabe sensei clearly enjoy her work to bits, and she got guts, especially in dealing death.(killing off characters) Her drawing is ever-changing that it's becoming gorgeous with a taste of authentic Japanese style. She knows when to reward the fans and when to hold back. At the end of the day, she pours everything to this work and makes it so sincere which sets Kekkaishi apart.
And I don't mind Kekkaishi being a oddball at all--because Kekkaishi is a literacy testament of a bona fide storytelling by a-master-in-the-making. Give it some more time, and perhaps, it might really be legendary.
Permalink " "
Review by kuro_D_neko

it wins shogakukan manga awards just like Japan! and FMA
its more than enough to say
and
even the main place is the school but
he can create such a complicated story, amazing
Permalink " "
Review by NaruJunky

Kekkaishi is an average manga. Definitely not one of the best out there. But it was good enough to make me keep reading it, and I even finished all the chapters in less than one week.

I won't analyze it as kaya did but I do want to give you the general feeling I got when reading it. Half of the manga I felt like I was watching fillers of a popular anime (like those of naruto, one Piece or Bleach), something like "just get to the damn point you no-good-of-a-writer". but the other half was a nice and an interesting story.

The bad thing in this manga is that it has a very very VERY SLOW pace and character development. For example the main character fights with one technique for the first 100 chapters and learns a new technique once in 120 chapters.

So if your asking yourself what kept me reading it the answer would be the story. the art is not bad as well. and if everything was not dragged so much it could even become one of my top favorites.

In the beginning I felt a lot of interest and I saw a big potential in this manga, but unfortunately in the end I can say that I expected much more from it.

I recommend reading it if a good storyline is what you look for.
Permalink " "
Review by Fire_ Fist_ Ace

kekkaishi is cool and funny i love the opening and ending song it 1 of the best today on TV. Permalink " "
Review by awesomelessness