Like us on Facebook, follow us on Twitter! Check out our new tumblr page. :)
Manga News: Toriko has come to an end; but be sure to swing by and share your favourite moments from the series!
Manhwa & Manhua News: Check out the new Manhwa and Manhua shout-out (March 2016).
Event News: One Piece Awardshas concluded. Check the results Here!
MangaHelpers > Manga > Browse > Boku no Shotaiken
Home
Chapters
Translations
RSS 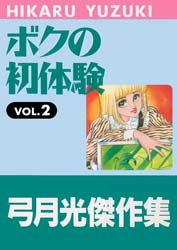 Despondent that the girl he loves does not return his affections, Eitaro attempts to commit suicide. But his near dead-body is discovered by a scientist and his mind is transferred to the body of a young girl. As a girl, Eitaro soon learns that the girl of his dreams did in fact love him, so they try to make the relationship work despite the fact that Eitaro is in a girl's body.

Comment by animenewsnetwork:
Boku no Shotaiken is particularly notable as one of the first (possibly the first) gender change manga.

Number of tankoubon: 3 Volumes
Collection of Hikaru Yuzuki(1995): Volume 1 and 2