Like us on Facebook, follow us on Twitter! Check out our new tumblr page. :)
Manga News: Toriko has come to an end; but be sure to swing by and share your favourite moments from the series!
Manhwa & Manhua News: Check out the new Manhwa and Manhua shout-out (March 2016).
Event News: One Piece Awardshas concluded. Check the results Here!
MangaHelpers > Manga > Browse > Brocken Blood
Home
Chapters
Translations
RSS 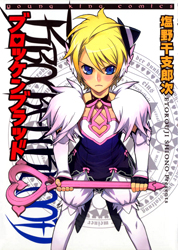 Volume I:
Kenichi Shurutsu is an ordinary high school kid... except that he transforms into a witch super heroine to fight evil do-ers that abuse alchemist powers. Kenichi is the direct bloodline of Johan Schultz, the original alchemist from 17th century Germany. With his older step-sister helping/forcing Kenichi to constantly dress like a girl, he finds himself in embarassing situations to fight his nemesis. [DrCoke]

Volume II:
In the present day, high schooler Kenichi continues to use this power to fight evil, with the help of his cousin Rena and her daughter Asuka. However, to use the power of "Brocken Blood" Kenichi must transform into a magical girl heroine! Rena and Asuka help him find suspicious situations where his powers might be needed, but they seem much more interested in promoting his career as a junior-high aged female pop idol named Sakurako Neuschwanstein. Will Kenichi be able to survive both fighting evil alchemy and the shame of becoming Japan's next hot female idol? [tethysdust]

Volume III:
This is the continuing story of Kenichi, a high school boy who uses the alchemical power of "Brocken Blood" to transform into a magical heroine and fight against evil alchemy. His cousin Rena and her daughter Asuka, who finds him incredibly sexy when he's dressed as a girl, help him find situations where his power is needed. They also manage his career as the famous female Idol Sakurako Neuschwanstein, whose reputation is faltering as a result of a false scandal. Will they be able to salvage Sakurako's career, or is this the end for the cross-dressing Idol? [tethysdust]

Volume IV:
Brocken Blood returns! As the 4th season unravels, it immediately begins with Kenichi’s disguise of being one of the idol trio “Kash Mash,” Sakurako Noishuvanstein. Several male students talk about the color of Sakurako’s panties, being it red, pink, white, etc. However that is just the beginning, as Kenichi has to investigate a mysterious virus that automatically changes the clothing of all good looking boys into wedding dresses which lurks within a studio by appearing on a talk show. The Kash Mash trio becomes worried that their identities might be revealed (All three “girls” are boys), but their worries turn to a different direction when the “perverted alchemist” returns! What now Kenichi, I mean, Sakurako!? [Mamo]

Volume V:
This is the continuing story of Kenichi, a high school boy who uses the alchemical power of "Brocken Blood" to transform into a magical heroine and fight against evil alchemy. Kenichi's female persona is the hot idol Sakurako Neuschwanstein, a member of the Kash Mash Trio (the other two "girls" are also gender-bending magic heroines). The three of them are filming a movie as a cover for checking out a mysterious situation that could call for alchemical assistance. [tethysdust]

Any future chapters of Brocken Blood should be released in the following format:

For example, information for Brocken Blood V Chapter 2 should be input as follows:

If a full volume is uploaded, it should still be released as "Special" and titled "Volume #" with a Roman numeral -- then ordered by the numeral number.