Like us on Facebook, follow us on Twitter! Check out our new tumblr page. :)
Manga News: Toriko has come to an end; but be sure to swing by and share your favourite moments from the series!
Manhwa & Manhua News: Check out the new Manhwa and Manhua shout-out (March 2016).
Event News: One Piece Awardshas concluded. Check the results Here!
MangaHelpers > Manga > Browse > Cuisine la Princesse
Home
Chapters
Translations
RSS 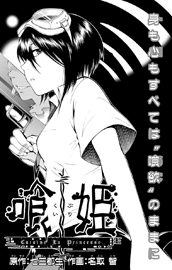 Officer Watanabe was called to the scene of a local restaurant where a girl named Sera Enoku was trying to dine and dash. With the city tied up in a mysterious runaway train, Watanabe decides to let Enoku off the hook. However, he soon learns about the existence of demons that feast on human beings and that Enoku is actually a demon in a human vessel. There is one thing different about Enoku though; she devours other demons. [vyc]