Like us on Facebook, follow us on Twitter! Check out our new tumblr page. :)
Manga News: Toriko has come to an end; but be sure to swing by and share your favourite moments from the series!
Manhwa & Manhua News: Check out the new Manhwa and Manhua shout-out (March 2016).
Event News: One Piece Awardshas concluded. Check the results Here!
MangaHelpers > Manga > Browse > Daisannou Shoujo
Home
Chapters
Translations
RSS 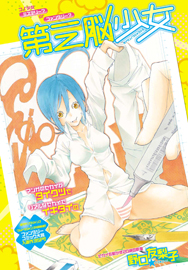 Nikaidou Jiro is a manga writer and his breakout series is Daisannou Shoujo. In his manga, in addition to the left and right side of the brain, there is a third part in very rare occasions that is used to predict the future. In the manga, a character named Saku, a school girl who has this third brain, uses it to see into the future. One day when Jiro was working on his new chapter, he receives a fan letter saying she is Saku with very convincing evidence about the plot line of the manga that only he knows about… [vyc]