Like us on Facebook, follow us on Twitter! Check out our new tumblr page. :)
Manga News: Toriko has come to an end; but be sure to swing by and share your favourite moments from the series!
Manhwa & Manhua News: Check out the new Manhwa and Manhua shout-out (March 2016).
Event News: One Piece Awardshas concluded. Check the results Here!
MangaHelpers > Manga > Browse > Love DNA Double X
Home
Chapters
Translations
RSS 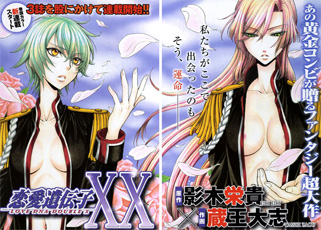 In 2122, the last man died, leaving all of humanity made up solely of women. The female leadership came up with an "Eden" plan, for the preservation of society. Women would be split up into an "Adam" type, a traditional male role, and an "Eve" type, a traditional female role. Adams and Eves are supposed to marry and make children from a sperm bank, thus preserving the traditional family. Aoi, an Adam, is a bitter and agressive new student at the government school "Kingdom", and she is determined to be the best one there. She also plans to avoid any relationship entanglements... but that may be a more difficult task than she imagines. [tethysdust]