Like us on Facebook, follow us on Twitter! Check out our new tumblr page. :)
Manga News: Toriko has come to an end; but be sure to swing by and share your favourite moments from the series!
Manhwa & Manhua News: Check out the new Manhwa and Manhua shout-out (March 2016).
Event News: One Piece Awardshas concluded. Check the results Here!
MangaHelpers > Manga > Browse > Alyosha
Home
Chapters
Translations
RSS 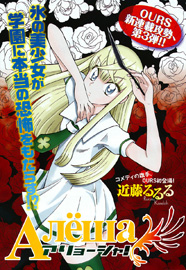 Foreign exchange student Alyosha Stalina has been attending a Japanese high school for 3 months. She comes from the nation of Solessia but she is yet to fit in with the other students because of her unfriendly demeanor and cold personality. Rightfully so because Alyosha is a trained assassin that has been murdering people since she was 5 years old. Officials in Estolakia, a country devastated by the attacks from Solessia, found the orphaned Alyosha and trained her as a top notch assassin to work against Solessia.

Her most recent and soon to be last mission is to murder the president of Solessia who is to attend the high school she has infiltrated for 3 months. However, the mission is aborted and she is ordered to remain a student. The only thing Alyosha knows how to do is to be an assassin and has never learned how to be a normal teenage girl. Will Alyosha be able to complete her most difficult mission yet? [vyc]