Like us on Facebook, follow us on Twitter! Check out our new tumblr page. :)
Manga News: Toriko has come to an end; but be sure to swing by and share your favourite moments from the series!
Manhwa & Manhua News: Check out the new Manhwa and Manhua shout-out (March 2016).
Event News: One Piece Awardshas concluded. Check the results Here!
MangaHelpers > Manga > Browse > Mahou Sensei Negima!
Home
Chapters
Translations
Forums
RSS 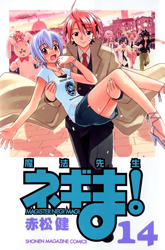 Ten-year-old prodigy Negi Springfield, has just graduated from magic academy. He dreams of becoming a Magister Magi [Master Mage]. And his first task is to become a teacher at Mahora Gakuen, an all-girls middle school! All the students are delighted with their cute new teacher—except for Asuna, who resents Negi for replacing the teacher she secretly has a crush on. Although he is forbidden to display his magical powers, sometimes Negi can't resist. And when Asuna discovers Negi's secret, she vows to make his life as difficult as possible—just the thing to prepare Negi for the challenges of life to become a Magister Magi! Things get complicate when a series of events occur, drag Negi and his students into an adventure around the fantasy magic world.

Most of the story revolves around Negi and his homeroom students, 31 sixteen year old girls. His class has pretty much every type of female character imaginable in it. Ninja, cyborg, inventor, kung-fu master, ancient vampire, gunfighter and the list keeps going on and on.

The adventures he and his very multi-talented class find themselves involved in are both action packed and stylish. This manga uses the diversity of it's cast of characters to really spice up the battles.

Where this manga really stands out though is the ecchi/comedy scenes, which are used as comic relief throughout. Through the use of the artist's talent for making his characters expressive, he makes scenes so funny you will fall out of you chair laughing. Permalink " "
Review by Densebrains

I really love this series. I am a fan of fantasy, magic and team orientated adventures. Every character has a different ability and thus they all have their strong and weak points. Through working together can they succeed in their quests.

I am reading the scanlations because I am in the UK but I am buying the cantonese version in Hong Kong as my manga collection is also in HK.

Thank you to the raw providers, translators and scanlators. Permalink " "
Review by Draco1988

What kind of manga you like? Adventure, Fighting, Vampire, Magic, Science-Fiction, Romance, Comedy, Ecchi, Loli, Shota, Shoujo-ai, Trap... name it and you will find it, all in one, the greatest manga ever Mahou Sensei Negima!

A ten-year-old boy in the class of 31 girls who are all 5 years older than him. A little mage trying to keep his huge secret in a mundane world filled with junior high school beauty. And a little boy getting his first confession from his shiest student.

A girl having a huge crush on her former teacher. A girl getting stripped by her new teacher at their very first meeting. A girl breaking all magic of any mage in the world. A girl with a forgotten past.

A loli vampire imprisoned in a junior high school. A robot learning to love. A wandering ghost without memory. A master of paparazi. A ninja in training. A kungfu master. A healing princess and her beautiful guardian. A dogboy. A mage in training. A doujinshika. A mind reader in love.

You can find them all in just one manga.

Take your share, join the adventure, immerge in the love and laugh your hardest with the greatest enigma of Mahou Sensei Negima Permalink " "
Review by NaruJunky

After reading the first 20 chapters I'm very disappointed. It's a very boring manga and a waste of time. Permalink " "
Review by caesarpk

You can like this manga and hate it at the same time, depending on how you feel about the ecchi fan services the author gives from time to time.

For the first 40 chapters or so, there is more than enough fanservice and background building, which makes the beginning really boring because it's practically a 10 year old kid harem story . And I won't blame anybody if he/she decides to quit reading the manga after the first method to power up is revealed...

However, the story begins a shift into real action with spectacular fighting w/ magic starting at the first big battle, and gets lots more interesting as story goes on.

The author is also very creative of his characters, and he gives them very interesting characteristics that are sometimes cliche if one think about it; however, he is very skilled to utilize the cliche characteristics into very exciting and unique fighting/adventure.
And of course, later on, the balance between fan service and serious situations are so much more appropriate and humorous.
Permalink " "
Review by Vanadio

I recomended this manga only are you like the funnies and ecchi mangas... XD

I like negima... but I like more the fight chapter, have a great situations... Permalink " "
Review by cnet128

I believe I read somewhere that Mahou Sensei Negima was born of conflicting interests. Akamatsu Ken wanted to try something different and write a shonen action manga... his publishers disagreed, and thought he should stick to the Love Hina-style harem comedy he was known for. If the story is true, then for once I'm actually grateful for interfering publishers... because the result was a unique and brilliant manga which manages to combine each of the above genres, and excel at both of them.

On the harem side of things, it immediately sets itself apart by having such a huge harem to work with. Indeed, the cast of characters is so large that at the time of writing, there are still numerous characters who have been in the manga since the first chapter but, 240 chapters later, still have yet to see much, or indeed practically any, of their inevitable limelight. (And Akamatsu does manage to pack an awful lot of plot into each 18-page chapter – it puts other shonen manga-ka to shame.) The cast revolves around main character Negi Springfield, ten-year-old Welsh mage (yes, ten years old), and the highly unusual class of 31 Japanese middle-school girls that he ends up teaching. Yep, that's thirty-one characters in the central harem, and Akamatsu isn't shy to introduce plenty of other characters (both friend and foe) besides. (And he isn't shy to show them off, either. Be prepared for fanservice of the highest degree!)

But when I say an "unusual" class, I really do mean it. True to the harem genre, the class contains a ridiculous range of character archetypes, including vampires, robots, geniuses, ninjas, sharpshooters, half-demons, ghosts, and plenty more besides. It still manages to find room for enough non-supernatural students to fall squarely into masquerade territory – because of course, magic is deadly secret even when half the class and the teacher are intimately involved with it – but the masquerade is something of a tenuous one, to say the least. Indeed, the school itself seems deeply rooted in the less-than-ordinary... the school library is a veritable RPG extra-dungeon complete with unexplored depths, hidden treasures and lurking ancient terrors, there doesn't seem to be a staff member without magical connections, and even the school's name ("Mahora Academy") recalls the Japanese "mahou", meaning "magic".

And of course, with all these less-than-ordinary abilities and situations floating around, the stage is well and truly set for some proper shonen action adventures! With so much going on in the school alone, it should come as no surprise that the hidden magical community is a hotbed of conflict and intrigue, with powerful enemies lurking at every turn... and Negi himself, it soon transpires, is on a life quest to find his disappeared father, a legendary hero known as the Thousand Master...

The battles are intense, the adventures thrilling, the characters full of personality and ever so attractive, the art magnificent, the fanservice plenty, and the fun just never stops. Go on, give Mahou Sensei Negima a try if you haven't already – it's certainly worth your time! Permalink " "
Review by SuperFLI

mahou sensei is an amazing manga that combines comedy, ecchi, action, a great story line and excellent art to produce one of the best manga's i've seen in years. everything about it will really catch the attention of readers who are looking for something with a little bit of everything in it.

the fact that it is a harem manga just adds more spice since it has a cast of 31 supporting female characters, and thats just from the outset. the cast of characters grows even larger as the series develops, and each character is unique and stands out from the rest, whether it be in design or personality.

the action is wonderfully depicted and the battle system for magic is well thought out and pretty cool. i especially love the way the environment and the characters are well detailed during battles. in every respect the eye candy in this series is enough to get your eyes to pop out.

this is a truly wonderful series that i would recommend to anyone who doesn't have a problem with ecchi and comedy in their manga dosage. Permalink " "
Review by dedi2s

I'm only been reading MSN for 2 months (very intensely in the past 2 weeks).
True as cnet, jammin and Draco1988, there are a certain type of girls that was left out :
The Baka Rangers (if you read enough manga, you'll know what 'baka' means).

It is also true that you'll get a lot of actions, fights, and comedy-ecchi.

But the one disappointing factor in this manga is the typicallity of shounen it is.

You have characters that are meant-to-be, fated kind (like Asuna) within the plot, though they fall into the plot not unbeautifully.

And there are also power ups trainings and fights, all in such a short time, with ridiculously heavy and difficult (think Dragon Balls). It almost seems too easy to gain more power and skill.

But, when all said and done (and read), I still like (I can't say love just yet) this series. Just wish the mangaka doesn't take "collecting data" routinr every so often. Permalink " "
Review by deidara

It's going great so far! Permalink " "
Review by LazyShizzle

This is one of the best, if not THE best, mangas I have ever read. The mix of comedy, romance, fantasy, and all the other components is just amazing. Akamatsu truly is one incredible genius. Permalink " "
Review by Arongomar

ya you guys know what happen to me...? will i was seen negima! for the first time on manga first 3 days ,all cool until i says negima!? i no longer available ,i was like >.< this cant be!!!!!!!!!!!!!!!!!!!! i look over a moth why did this happen and i finally found why,here is why''we have too remove the OM(mangas online)from the websites cause we finally have trance late the original mangas to English"basically they remove the OM cause if they leave it on the won't have Any sails of there mangas,true but that's not cool ,there wore people working there ass to make a scanlation's cleanup's ect...,i think that we have the right to do or make what we want. that is all for now
by:ARONGOMAR::>.< Permalink " "