Like us on Facebook, follow us on Twitter! Check out our new tumblr page. :)
Manga News: Toriko has come to an end; but be sure to swing by and share your favourite moments from the series!
Manhwa & Manhua News: Check out the new Manhwa and Manhua shout-out (March 2016).
Event News: One Piece Awardshas concluded. Check the results Here!
MangaHelpers > Manga > Browse > Ai - Hikari to Mizu no Daphne
Home
Chapters
Translations
RSS

Ai - Hikari to Mizu no Daphne 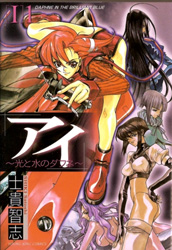 Daphne in the Brilliant Blue take place in a near future in which the remaining population lives in underwater cities, with waterways as streets. Years ago, while conducting underwater experiments, all contact with the surface was cut off. With the remaining human population now living underwater, The Deep Sea 9 Cities Association represent the last hope of mankind. Ai Mayuzumi is the daughter of the head of the research lab, and is an expert water jet bike driver. When the terrorist group Error, attacks the city, Ai becomes involved with the counter-terrorist group Stelnas, comprised of an all-female team, and led by a girl named Kei, and asks to join them. The group initially resists her efforts to join, but a surprising "gift" that Ai possesses, along with the way she handles herself during a kidnapping attempt, eventually sways the opinion of the members of Stelnas.