Like us on Facebook, follow us on Twitter! Check out our new tumblr page. :)
Manga News: Toriko has come to an end; but be sure to swing by and share your favourite moments from the series!
Manhwa & Manhua News: Check out the new Manhwa and Manhua shout-out (March 2016).
Event News: One Piece Awardshas concluded. Check the results Here!
MangaHelpers > Manga > Browse > Kuroko no Basket
Home
Chapters
Translations
Thread
RSS 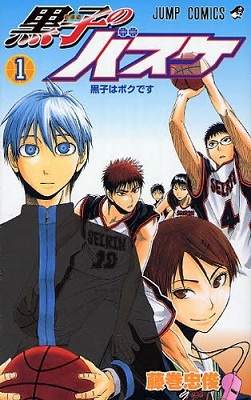 Kuroko is a member from the legendary middle school basketball team known as "The Generation of Miracles", and while nobody seems to know about him, the main 5 players of the team all admit that he is a better player. When he joins the high school basketball team, everyone is surprised to find out that he is small, weak, and easy to miss. What is the secret that makes him so strong, and how will he help his high school team?

It's very unusual for a main character of a shounen manga series to be away from the spot light. The main character's name is aptly derived from stage-hands who dressed in black to imply that they are invisible and not part of the action on-stage.

Just as his name suggests, Kuroko serves more to support his team mates. He specializes in dealing complicated passes and feints, integrating sleight of hand tactics to make up for his averageness in everything else--in fact, he can't even shoot. Instead, he chooses to remain in the shadows to let his team mates' light shine brighter. This is especially true for Kagami (a team mate whose personality is closer to the usual main character persona). However, Kagami never overshadows Kuroko's discrete yet unquestionable brilliance.

Having the main character represent the link between the team members further emphasizes the importance of teamwork. Having such an interesting main character certainly brings a novel concept to a sport that has received more than its fair share of manga titles.

So if you are looking for a good sports manga, don't hesitate to give "Kuroko no Basket" a shot. :D Permalink " "
Review by Cococrash11