Like us on Facebook, follow us on Twitter! Check out our new tumblr page. :)
Manga News: Toriko has come to an end; but be sure to swing by and share your favourite moments from the series!
Manhwa & Manhua News: Check out the new Manhwa and Manhua shout-out (March 2016).
Event News: One Piece Awardshas concluded. Check the results Here!
MangaHelpers > Manga > Browse > Derby Queen
Home
Chapters
Translations
RSS 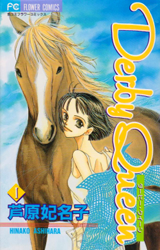 Ootome Hime's father was a jockey who dreamed of winning the Japanese Derby. One year, when Hime went to watch him race in the Derby, he died in a horrible racing accident. The man responsible retired in guilt from being a jockey.

10 years later, Hime is in high school, and she has heard that Arakawa Jin, the son of the man who killed her father, is debuting in the Derby as a jockey. She went to see him race, and was outraged to see him win! Now Hime has decided to quit high school and go to a special school for jockeys, in hopes of being able to beat Jin in a race one day. She has met a new friend and aspiring jockey along the way, a boy called Tadano Ryouhei, but she can't let him stand in the way of her revenge!