Like us on Facebook, follow us on Twitter! Check out our new tumblr page. :)
Manga News: Toriko has come to an end; but be sure to swing by and share your favourite moments from the series!
Manhwa & Manhua News: Check out the new Manhwa and Manhua shout-out (March 2016).
Event News: One Piece Awardshas concluded. Check the results Here!
MangaHelpers > Manga > Browse > Dieland
Home
Chapters
Translations
RSS 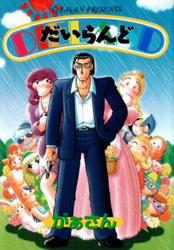 The gangster Masao is in a really tough spot, being chased by his enemies, when suddenly he is magically transported to the fairy-tale world of Dieland! Here everyone is jubilantly happy and trusting, and there is no anger, hatred, or even sex (the people don't even have the appropriate parts for it)! This is clearly not the right place for a violent punk like Masao, but will he be able to find the Ruler of the Night Country and convince him to send him home?
[tethysdust]

------------
Note: The serialization of Dieland was in Young King Ours (Shounen Gahosha) in 1994, but Gahosha never released a tankoban for it. In 1999, Daitosha released Dieland as a tankoban under its Hard Comics imprint, which is currently out of print. [fallacies]