Like us on Facebook, follow us on Twitter! Check out our new tumblr page. :)
Manga News: Toriko has come to an end; but be sure to swing by and share your favourite moments from the series!
Manhwa & Manhua News: Check out the new Manhwa and Manhua shout-out (March 2016).
Event News: One Piece Awardshas concluded. Check the results Here!
MangaHelpers > Manga > Browse > Docca
Home
Chapters
Translations
RSS 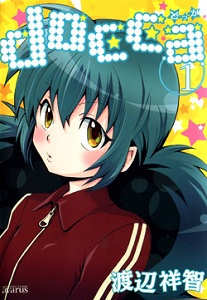 Maruyama Mahiru hs moved back to a town she used to live in when she was very small to attend high school. She doesn't really remember much about the town, but it recently went through some drastic changes. Five years ago, the town became connected to some other world, which the townspeople refer to as "docca." Since then, many different fantastical creatures have leaked through into our reality. For instance, Mahiru's first day of school is canceled due to a dragon!

On her way to school, Mahiru meets an older schoolmate, Kanda Rekka, who is involved in the management of the "docca" problem, and helps her track down a gorgeous prince. He remembers almost nothing about himself or where he came from. Mahiru would like to have an ordinary high school life, but she soon finds herself roped into helping out the new prince and joining the "docca" team! [tethysdust]