Like us on Facebook, follow us on Twitter! Check out our new tumblr page. :)
Manga News: Toriko has come to an end; but be sure to swing by and share your favourite moments from the series!
Manhwa & Manhua News: Check out the new Manhwa and Manhua shout-out (March 2016).
Event News: One Piece Awardshas concluded. Check the results Here!
MangaHelpers > Manga > Browse > Dokuro
Home
Chapters
Translations
RSS 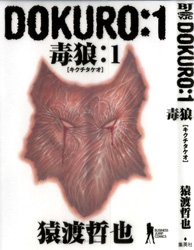 The story is set in a dystopian near future where the Japan society is experiencing a crime rampage and in which a powerful and secret religious organization, with mysterious goals, is acting as an invisible hand behind the scenes.

The main character is their strongest assassin, lended to them by his fanatic mother when he was a child, and now became a ruthless killing machine whose fists and feet cause serious damage to his adversaries, and whose weapon of choice is a special cutting wire with which grabs and scorch the opponents.

He's a man hunter, whose childhood has been stolen and molded after his tormentors, but when the road of forgiveness is precluded to him what can be left to a man to obtain the redemption?

Takeo finds the answer in the vengeance, and in eradicating that same evil from which he has born.

So this dark and impressive badass guy, after betraying the sept, gets down to business kicking their ass and unleashing his fury against the deadly opponents sent to stop his unparalleled revenge. --- Ripped from Mangaupdates.com