Like us on Facebook, follow us on Twitter! Check out our new tumblr page. :)
Manga News: Toriko has come to an end; but be sure to swing by and share your favourite moments from the series!
Manhwa & Manhua News: Check out the new Manhwa and Manhua shout-out (March 2016).
Event News: One Piece Awardshas concluded. Check the results Here!
MangaHelpers > Manga > Browse > Dousei Recipe
Home
Chapters
Translations
RSS 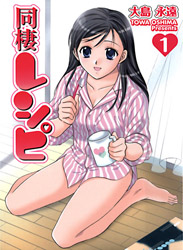 This is a love comedy manga which describes the trials and tribulations of two young people, Fujiwara Suzune, a high school girl who runs away from home, and her boyfriend, college student Hirano Takeshi as they start living together. Both care for each other a lot, but begin to realize that living together is a whole different story compared to dating. It doesn't help that both are innocent, naive and shy. In many occasions both misunderstand each other. Both also discover some unlikable traits of each other, but neither has the courage to voice them out because they're worried it might jeopardize their relationship. They learn to compromise and put up with each other.

Takeshi wants to become more intimate with Suzune, but he's afraid she might grow to dislike him if he starts making moves on her (or just think he's a pervert). He constantly has to refrain himself from forcing himself on her. Her innocent and sweet demeanor makes it more difficult for him too. Nonetheless, when she becomes upset or troubled, Takeshi goes to her aid, and his moral side prevails most of the time. If all else fails, Suzune's father, a yakuza leader, is enough of a threat for Takeshi to behave!

Suzune, on the other hand, is rather oblivious to his needs, rather she's worried that she living in his apartment is a hindrance to him. Hence she tries hard to satisfy him (domestically) and tries not to voice out her (domestic) dissatisfaction. She's also very insecure and has an issue of being hairy for a girl.

Luckily (or not?), both our protagonists have trusted advisors. Takao, Takeshi's classmate at college, is a typical cassanova. He's always giving Takeshi tips on how to get Suzune in bed, and sometimes puts ideas into his head. Despite that, he does mean well.

Takeuchi Mihoko ("Take-chan"), Suzune's best friend, however, is skeptical about Takeshi and thinks he's not competent enough to be Suzune's boyfriend. She has tried several times to break them up by giving Suzune bad advise. In volume 1 it seems as though Take-chan's interest in Suzune is more than a friend, or maybe she's just over-protective.....

This manga started out as 2 one-shots entitled "Oazuke Baby", and is now being serialized in Young Gangan once a month. Read on to find out whether our sweet couple manages to stay together to face-off the challenges of real everyday life (and the occasional sabotage)!