Like us on Facebook, follow us on Twitter! Check out our new tumblr page. :)
Manga News: Toriko has come to an end; but be sure to swing by and share your favourite moments from the series!
Manhwa & Manhua News: Check out the new Manhwa and Manhua shout-out (March 2016).
Event News: One Piece Awardshas concluded. Check the results Here!
MangaHelpers > Manga > Browse > Dragon Quest: Emblem of Roto
Home
Chapters
Translations
RSS 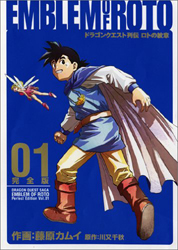 Dragon Quest: Emblem of Roto is a story set between the games "Dragon Quest III" and "Dragon Quest I." It was one of the most popular series in Shounen GanGan during the early 90's.

Loran and Carmen -- two nations whose royalty are of the blood of the legendary hero, Roto. For a century, their armies have guarded humanity from the hordes of mazoku that plagued the lands, standing firm as a bastion against evil. It seemed that they could never fall.

But good things don't last. Within the period of a fortnight, the armies of both states are infiltrated by the agents of the newly resurfaced Demon Lord Imagine, and the royalty is purged. Uniting the squabbling mazoku clans into a single front of possibly unprecedented scale, Imagine plunges the world into an era of uncertainty and terror. One by one, the human nations fall.

Arus, the prince of Carmen, is saved by royal advisors and sent away before Imagine's agents can capture him and turn him into a pawn. Growing up under the care of the general's daughter Lunafrea and the Court Priest Tarkin, he swears that he will defeat Imagine and save the world. When his initial training is concluded, he sets out on a journey to seek out the successors of Roto's companions -- the Blademaster, the Martial Artist, and the Sage -- and to obtain the legendary relics that comprise Roto's legacy.

In the citadel of the mazoku, the Dragonlord, a loyal general of Imagine, cultivates the other descendant of Roto at Imagine's command -- Jagan, the prince of the former kingdom of Loran. In time, he is to be named the Majin-ou, and he shall lead a fourth of Imagine's troops as a dark successor to Roto's legend.

What awaits Arus and Jagan? What will happen when their paths cross?

Note #1 - Eien no Manga has discontinued their English translation of this series. Existing English chapters may be found at: http://www.mangafox.com/manga/dragon_quest_emblem_of_roto/

Note #2 - In 2006, a 15-volume reprint of the series called "Emblem of Roto - Kanzenban" was released, which restored color pages that were in the magazine serialization but not included in the 21-volume tankoban series. Some scenes in this version have been redrawn or modified. Most significantly, the final chapter has been substantially expanded.

Unfortunately, volumes 1, 2, and 17 are of low quality. If anyone has better raws, please upload. Permalink " "