Like us on Facebook, follow us on Twitter! Check out our new tumblr page. :)
Manga News: Toriko has come to an end; but be sure to swing by and share your favourite moments from the series!
Manhwa & Manhua News: Check out the new Manhwa and Manhua shout-out (March 2016).
Event News: One Piece Awardshas concluded. Check the results Here!
MangaHelpers > Manga > Browse > Esper Mami
Home
Chapters
Translations
RSS 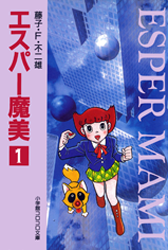 Esper Mami (エスパー魔美, Esupā Mami?) is a manga created by Fujiko F. Fujio in 1977 and serialized in Shōnen Big Comic. It was later adapted into an anime series.Mami Sakura used to be a normal junior high school student, but she happened to acquire supernatural powers. Using her powers and with the help of her best friend, Mr. Takahata, she solves mysterious occurrences. When she senses someone needs help, she uses the "Teleportation Gun" and transports herself there. She then saves the people in trouble with her psychic powers, such as telekinesis and telepathy.