Like us on Facebook, follow us on Twitter! Check out our new tumblr page. :)
Manga News: Toriko has come to an end; but be sure to swing by and share your favourite moments from the series!
Manhwa & Manhua News: Check out the new Manhwa and Manhua shout-out (March 2016).
Event News: One Piece Awardshas concluded. Check the results Here!
MangaHelpers > Manga > Browse > XX X-Cross
Home
Chapters
Translations
RSS 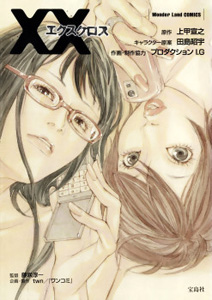 After Shiyori finds out that her boyfriend has cheated on her, she and her friend Aiko go on a hot springs vacation. They go to a strange, isolated town called Ashikari, which is completely surrounded by a river and mountain, with only a single bridge connecting it to the outside world. Their vacation quickly turns into a nightmare! Soon Aiko and Shiyori are separated, and a creepy, deadly woman who looks exactly like Shiyori begins to stalk them. Both Shiyori's ex-boyfriend and a man called Mononobe contact Shiyori, claiming to want to help her escape. Will Shiyori and Aiko be able to figure out what's happening and who to trust before it's too late? [tethysdust]