Like us on Facebook, follow us on Twitter! Check out our new tumblr page. :)
Manga News: Toriko has come to an end; but be sure to swing by and share your favourite moments from the series!
Manhwa & Manhua News: Check out the new Manhwa and Manhua shout-out (March 2016).
Event News: One Piece Awardshas concluded. Check the results Here!
MangaHelpers > Manga > Browse > Danzai no Ake
Home
Chapters
Translations
RSS 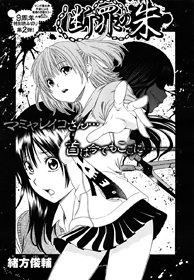 At Sakashita Tomomi's high school, there is a ghost story about a girl named Mamiya Reiko. One of Reiko's female classmates fell in love with her, but Reiko rejected her. The angry girl then killed Reiko, cut off her head, and jumped to her death with it from the 4th floor of the school building. When her body was found, both heads were missing. It is said that you can summon Reiko's vengeful ghost by reciting a line in the classroom from which her murderer leapt.

Tomomi went up to the classroom on an errand from a teacher, and walked in on a girl chanting the summons. The girl, Akane, was a stranger who came by to check out the ghost story. Now the two girls are trapped in the suddenly eerily empty school building. Will they make it to the morning in one piece!? [tethysdust]