Like us on Facebook, follow us on Twitter! Check out our new tumblr page. :)
Manga News: Toriko has come to an end; but be sure to swing by and share your favourite moments from the series!
Manhwa & Manhua News: Check out the new Manhwa and Manhua shout-out (March 2016).
Event News: One Piece Awardshas concluded. Check the results Here!
MangaHelpers > Manga > Browse > Tekken Comic
Home
Chapters
Translations
RSS 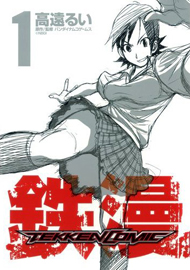 During the King of the Iron Fist Tournament #6, a war of global domination is being waged by corporations headed by a father and son, Mishima Kazuya and Kazama Jin. This story focuses primarily on Kazama Asuka, a young woman with a strong sense of justice who has trained in the Kazama fighting style. She's decided to take a stand against the damage her relative Jin is doing to the world. However, her defeated rival from Tournament #5, Lili Rochefert, is back for vengeance! Will Asuka be able to resolve the issue with Lili and stop Jin? [tethysdust]