Like us on Facebook, follow us on Twitter! Check out our new tumblr page. :)
Manga News: Toriko has come to an end; but be sure to swing by and share your favourite moments from the series!
Manhwa & Manhua News: Check out the new Manhwa and Manhua shout-out (March 2016).
Event News: One Piece Awardshas concluded. Check the results Here!
MangaHelpers > Manga > Browse > Fuji Cue!!! Fuji Cue’s Music!!
Home
Chapters
Translations
RSS 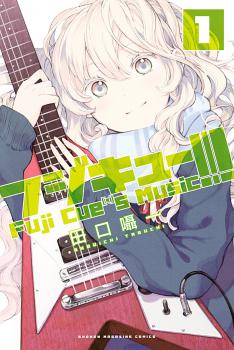 When Fujiwara Motomu was first introduced to live rock music, he decided it was amazing and he wanted to be a part of it! He ran into a band member from "Blue Bears" (the band he first saw live) at a convenience store, and begged the band member to let him join. The band member told him that if he could get the top rank at the Japan Academy of Music (J.A.M.), he could join them.

Fujiwara (nicknamed Fuji Cue) immediately started practicing guitar, and somehow managed to pass the entrance exam for the J.A.M.. At the entrance ceremony, he found that he would be paired with another student, and they would be required to give a live performance at the Welcome Convention. His partner, Hoshikawa Uta, is an incredibly talented girl, who suffers from crippling stage fright. Will they make it through their live performance, and will he be able to achieve his dream of getting to the top? [tethysdust]