Like us on Facebook, follow us on Twitter! Check out our new tumblr page. :)
Manga News: Toriko has come to an end; but be sure to swing by and share your favourite moments from the series!
Manhwa & Manhua News: Check out the new Manhwa and Manhua shout-out (March 2016).
Event News: One Piece Awardshas concluded. Check the results Here!
MangaHelpers > Manga > Browse > Tetsu no Ou
Home
Chapters
Translations
RSS 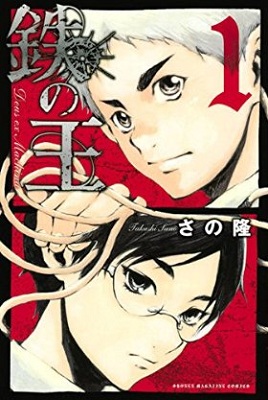 Hyuga Tetsuo and Kusanagi Itsuki have been best friends since childhood, even though they are very different. Tetsuo is loud, good-natured, rough, not very smart, and dreams of being a teacher one day. Itsuki is smart, quiet, and very serious. One day, Tetsuo gets in a fight that leads his teacher to expel him from school, and Itsuki gets the same treatment for trying to help him. While Tetsuo is angrily sitting in class afterward, a missile launches from his pinky finger, killing the teacher.

Tetsuo soon finds out that he is or is becoming more than what he once was. He's now become embroiled in a war he doesn't understand, and one of his other classmates has revealed herself as his ally. However, Itsuki is not involved, and staying near Tetsuo will likely end up getting him killed. Will Tetsuo be able to figure out what's going on, and also protect his best friend? [tethysdust]