Like us on Facebook, follow us on Twitter! Check out our new tumblr page. :)
Manga News: Toriko has come to an end; but be sure to swing by and share your favourite moments from the series!
Manhwa & Manhua News: Check out the new Manhwa and Manhua shout-out (March 2016).
Event News: One Piece Awardshas concluded. Check the results Here!
MangaHelpers > Manga > Browse > Sukedachi 9
Home
Chapters
Translations
RSS 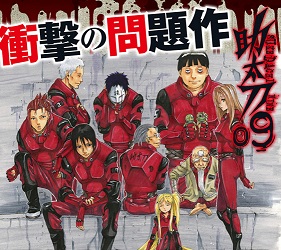 As Japan's population grows older and smaller, and murder rates sky rocket, the Japanese government began to implement stricter laws against the worst criminals. With even the death penalty lacking the deterring force to stop the most violent criminals, Japan brought back to life a law from the 19th century: the "Revenge" law. This law will now allow victims and their related parties to employ a government special forces agency to capture the murderer and reenact the exact same methods with which the victim died onto the murderer.

Yamagishi Yuji is the 7th member of the Special Forces "Sukedachi-nin." Each of the members of this special forces have been chosen to enforce the Revenge law because they too have been a victim of past crimes. [DrCoke]