Like us on Facebook, follow us on Twitter! Check out our new tumblr page. :)
Manga News: Toriko has come to an end; but be sure to swing by and share your favourite moments from the series!
Manhwa & Manhua News: Check out the new Manhwa and Manhua shout-out (March 2016).
Event News: One Piece Awardshas concluded. Check the results Here!
MangaHelpers > Manga > Browse > Ginga Sengoku Gunyuu-den Rai
Home
Chapters
Translations
RSS 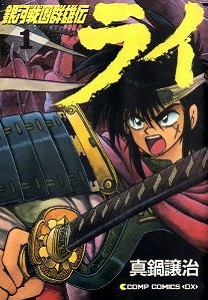 With the decline of the galactic empire, the milky way has dissolved into a confusion of warring leaders. One of the strongest of these warlords manages to defeat the imperial Asou Shuzen, and take the remaining imperial family member, the Princess Shimon, as a prisoner. Will she be able to become something more than a pawn in her captors ambitious plans of conquest? In the meantime, a solider named Rai has become fed up with his leader after returning from a battle with only 3 surviving soldiers in his band. But all Rai's defiance gains him is a glimpse of Princess Shimon and an unwanted place in the warlord's wild daughter's bed. What will future hold for Rai and for the galaxy?
[tethysdust]

---
Notes: Published by Kadokawa Shoten in "Monthly Comic Comp" from November 1989 to January 1993, and then subsequently by ASCII Media Works in "Monthly Dengeki Comic Gao!" from February 1993 to November 2001. A oneshot sidestory appeared in the February 2003 Extra Edition of "Comic Gao!"