Like us on Facebook, follow us on Twitter! Check out our new tumblr page. :)
Manga News: Toriko has come to an end; but be sure to swing by and share your favourite moments from the series!
Manhwa & Manhua News: Check out the new Manhwa and Manhua shout-out (March 2016).
Event News: One Piece Awardshas concluded. Check the results Here!
MangaHelpers > Manga > Browse > Mega Cross
Home
Chapters
Translations
RSS 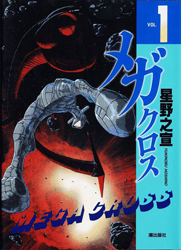 In the future, in a rush much like the American gold rush, many people immigrated to our solar system's asteroid belt to mine the asteroids. A society developed out in the belt, and the citizens, who were generally looked down upon by earth citizens, came to be known as "Belters". Eventually, this community sought independence from the earth, ushering in a war. The Belters could not stand against the earth military, and they were defeated, falling back under the harsh control of the earth.

Twenty years later, an old man called Bou discovered a still-living baby in a tank within the wreckage of a ship from the war. He named the boy Cross, after the Belter's greatest hero, and raised him with the hope that he would grow to become a messiah for his people. At the age of ten, Cross is captured by earth soldiers and forced to leave his guardian's care. What connection does this young boy have to the legendary hero Cross? Will he be able to pass through the trials that lie before him, and fulfill the expectations he does not even know that his people have of him?
[tethysdust]

Was first published in Hokkaido Shimbun in 1993-1994 and later Media Factory reprinted the series in Comic Flapper in 2008.