Like us on Facebook, follow us on Twitter! Check out our new tumblr page. :)
Manga News: Toriko has come to an end; but be sure to swing by and share your favourite moments from the series!
Manhwa & Manhua News: Check out the new Manhwa and Manhua shout-out (March 2016).
Event News: One Piece Awardshas concluded. Check the results Here!
MangaHelpers > Manga > Browse > 7 Daime no Tomari
Home
Chapters
Translations
RSS 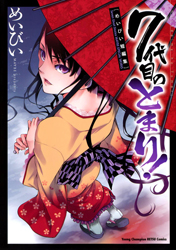 1) 7 Daime no Tomari (The Seventh Generation, Tomari): Tomari is a cursed woman who must do specific sexual things with her partner or the curse will kill her. Her partner, randomly chosen by the curse, is a guy called Naoki. He's pretty much willing to do whatever she needs, but Tomari will have to get past his incestuous sister Kyoko first.
2) Hajimete, to: A teenage couple, Seriko and her boyfriend Ogihiko, find themselves caught in a plot from her crazy mafia family to make them lose their virginity together.
3) Sandy Go Home: Yoko returns from studying abroad in America with her sex-crazed roommate Sandy, and they both proceed to fight over who gets to have sex with her brother.
4) Meteyunde: After their parents died in a traffic accident, Morote's two older sisters became insane. Is he safe in the house with them any longer?
5) Pastel Aiborii: School kids have a sexual encounter in a bathroom.
6) Ninjia Shoujo Makari Tooru: When a ninja invades a girl's bedroom, he finds himself completely outmatched by her skills, both ninja and erotic.
7) 80D: A couple has a sexual exploit in a library after hours. [tethysdust]

Maybe is such a god tier artist Permalink " "