Like us on Facebook, follow us on Twitter! Check out our new tumblr page. :)
Manga News: Toriko has come to an end; but be sure to swing by and share your favourite moments from the series!
Manhwa & Manhua News: Check out the new Manhwa and Manhua shout-out (March 2016).
Event News: One Piece Awardshas concluded. Check the results Here!
MangaHelpers > Manga > Browse > Boku wa Tomodachi ga Sukunai
Home
Chapters
Translations
RSS 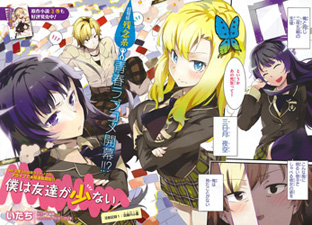 Based on the light novel by Hirasaka Yomi & Buriki.


Hasegawa Kodaka has transferred schools, and he's having a hard time making friends. It doesn't help that his blond hair tends to make people think he's a delinquent. One day, he runs into his bad-tempered solitary classmate Yozora while she's talking animatedly to her imaginary friend Tomo. Realizing that neither of them have any actual friends, they decide that the best way to alter this situation is to form a club and start recruiting.

That is how "Rinjinbu" was formed, a club specifically designed for people who don't have very many friends. As other lonely classmates slowly join their little club, they'll try to learn how to build friendships through cooking together, playing games, and other group activities. But will this group of relationship-challenged misfits really be able to get along?